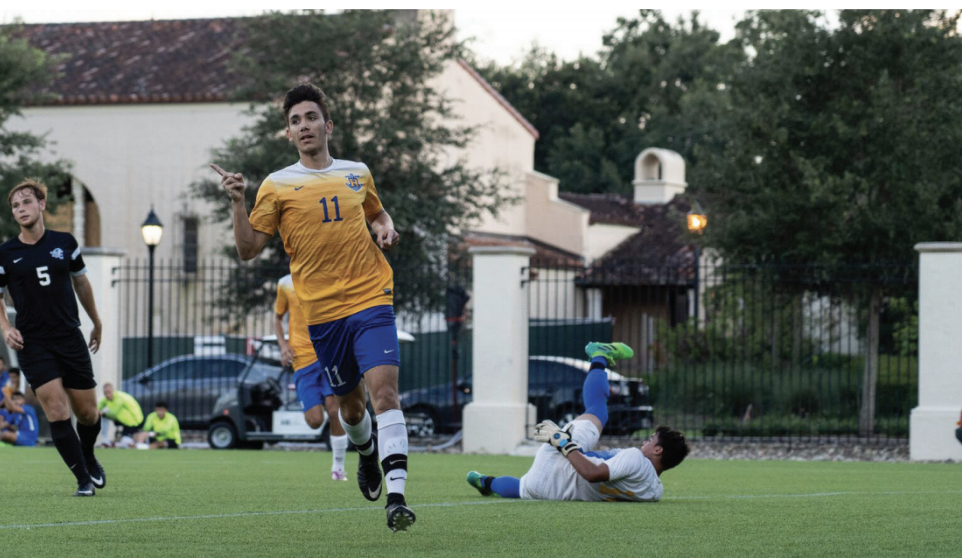 Ray Gerke (‘19) latches a diagonal ball that, despite the deflection, perfectly matches the pace and direction of the sprint by Christian Adams (‘22). The latter buries it into the far post, making it 5-0 for Rollins against the Trinity Baptist Eagles.

The Sept. 14 game marks the third shutout win in six days for the men’s soccer team, with a combined score of 13-0. Now, the Tars will head into conference play with a perfect 6-0 record, their best start since 2013.

Coach Keith Buckley is content, yet contained: “We’re doing well, but tonight’s game was against a school with a new program. They are going to do a great job over the course of time.”

“We were really pleased with our trips to Pensacola and Spring Hill,” Buckley said. “We played really well. We are also getting players back, so we have competition for places.”

The competition is particularly fierce for a spot on the field. Buckley fielded a different goalkeeper for every half in the last two games.

Furthermore, Abdiel Martinez (’22) and Eidur Ivarsson (‘22) both picked up Sunshine State Conference Defensive Player of the Week awards for their goalkeeping efforts on the first and second week of the season, respectively.

Who is going to be the showstopper for the first conference game Wednesday, Sept. 19 against the Florida Southern Mocs? “It’s a very tough choice,” Buckley said, “We’re going to practice Saturday, Monday and decide on Tuesday.”

Buckley’s choice for goalkeeper will be important, as Florida Southern is also undefeated with a 5-0 record on the season thus far.

In the first half against Trinity Baptist, Buckley fielded a more senior-based side, as Stefan Avram (‘19) went back to his scoring ways with two goals that nearly turned into three had it not been for the crossbar on two occasions and numerous heroics from the Eagles’ keeper.

Avram is the top scorer in the conference with eight goals in six matches. George New (‘19) also made his mark with a solid performance in midfield, coronated by a splendid free kick that sealed the game for the Tars before the half-time whistle.

The second half saw an almost complete rotation and more freshmen on the pitch. “The goal was to give everybody 45 minutes,” said Buckley, who was quite happy with the newcomers’ contribution to the game. “Christian [Adams] and Ray [Gerke] played really well. They were pushing the whole time,” he said.

Adams, a true freshman and constant offensive threat to the opponents, was delighted to grab his first goal in a Rollins jersey: “It feels amazing. It was long awaited, as it took a little longer than I expected. I hope to score more this season.”

Earlier, Tyler Nagy (‘22) produced perhaps the most exciting moment of the match with a stunning goal from the edge of the box that created long-lasting enthusiasm on the stands. “The defender was coming up on me and I knew I just had to hit it as fast as possible,” Nagy said.

“It felt awesome. It took a couple of games to get the feel of the college game, which is a lot more fast-paced. I’m really excited,” said Nagy.

Rollins had 31 shots compared to only two for Trinity Baptist, but the true dominance laid in the dynamics of the game. “I think we’re playing really well,” Adams said. “We kept the ball really well, we pressed well as a team, controlled the midfield and our wingbacks got into play 24/7. If that’s what the future is going to be like, I think it is very bright.”

Yet, Buckley is adamant that the team takes matches one at a time as they prepare to travel to Florida Southern College.

The players seem ready to take on Wednesday’s challenge. For nearly a third of the team, this will be their first conference experience.

“We’re doing pretty well so far. It’s pretty difficult adjusting to the game’s speed and playing with the other juniors and seniors who are used to it,” Nagy said. “It is good for us to get accustomed to it before we head into the conference.”

“Florida Southern is going to be a tough match,” he said, “but we are looking forward to it.”