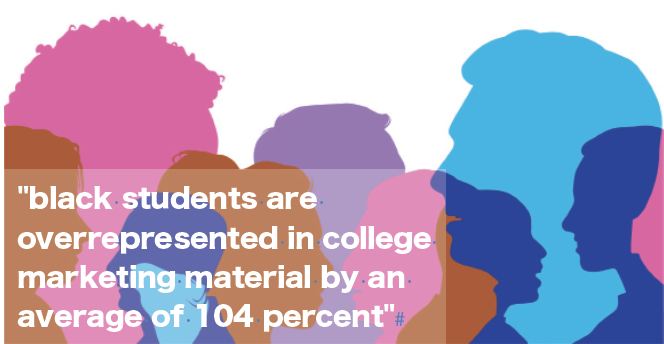 A study in the Journal of Marketing for Higher Education shows that black students are overrepresented in college marketing material by an average of 104 percent. This trend, although not specific to Rollins, has been felt by students of color on campus.

Based on the marketing materials Nasya Jasper (‘20) was given when choosing to come to Rollins, she thought there would be more students of color.

“Using pictures that way is Rollins trying to perpetuate a narrative of, ‘We’re a diverse school, look at all these brown people.’ But in actuality, there is basically no diversity here, and it’s basically like false advertising,” she said.

The Rollins institutional census for 2018-2019 said that African Americans made up 5.4 percent of the total student population.

Faye Tydlaska, vice president for enrollment management and marketing, said authenticity was the department’s first priority: “We want to be accurate, we want to be authentic.” But she also said, “we intentionally seek out diversity in our stories and in our photography.” When asked whether diversity marketing is aspirational or representative, she said it is “a bit of both.”

Dr. Amy Armenia, chair of the sociology department, said that it could be a good thing to inflate diversity in marketing brochures because “materials that were more ‘truthful’ in their representation might be alienating to students in underrepresented groups.”

Tydlaska said, “Students want to be able to see themselves in both the stories and the photographs.”

Armenia added that overrepresentation in marketing could lead people to “interpret these aspirational or welcoming images as misleading, especially when African-American students come to campus and realize that they are only 5 percent of the student population.”

Jasper shared negative views on the subject: “I wouldn’t have come here if I knew I would have to exist in a white space, and that there is no space for people of color to exist. We carve out our spaces, and our little nooks, but I think for the overall experience, we are forced to exist in this white space, and then they only want to celebrate our diversity when it’s advantageous for them.”

The Black Student Union (BSU) is “a solidarity and support in defiance of this white space that we have been pushed into,” said Jasper. While noting the sense of community she found at BSU, Jasper said, “I think that they really over-publicized those [BSU] photos, as if to say this is kind of normal, that this is a grouping of people of color, and it doesn’t normally happen like that in classes or at other events,” Jasper said.

Students of color, they said, were hand-picked and selected to enhance the appearance of diversity when team photos were being taken.

Martinez talked of these efforts as an attempt to correct how predominantly white sports photographs have been in the past.

“The picture they have right now … it’s all white kids, with maybe two or three light-skinned girls, so I think they tried to make it diverse,” Martinez said, in reference to the large photograph in the Alfond Sports Center on the stairs leading up to the athletic offices.

Martinez also noted the gap in expectations versus reality that may form as a result of exaggerated diversity: “I think they can make it look diverse, but once you’re on campus, you’re gonna see what it’s actually like.”

Hall, although not a student of color, has seen the impact of faux diversification with her teammates. She said, “representation is important, but to a certain extent. There has to be action behind their images.”

Students and faculty emphasized the importance of ensuring that the desire to increase and encourage diversity on campus is also accompanied by support for a diverse student body.

Jasper spoke about the increased feelings of pressure that occur for students of color existing in a “predominantly white space” and the need for Rollins to divert more funds to support those students.

“Resources could be better allocated to making this campus a more inclusive environment, rather than just saying that,” said Jasper. She said concerns about Rollins’ focus on construction and beautification projects rather than supporting minority students with scholarships and aid.

The issue of misrepresenting diversity in photographs is one that not only concerns race, but accessibility.

Joseph Walding (‘20) shared his experiences of being photographed while using his wheelchair. During his freshman year, he said that two photos were taken of him in the library and on Mills Lawn, both of which were posted on the Rollins website.

He said that this disproportionate attention and photography was a “unique experience,” considering the large size of the incoming class that year, at 625 students.

Dr. Kimberly Dennis, professor of art history and coordinator of sexuality, women’s, and gender studies, has been involved in a number of diversity initiatives and organizations on campus, including the Diversity Council.

Dennis said that “it is possible that using more diversity in Rollins marketing materials may be a good thing,” but added that this is only “if Rollins then also provides the resources to support a more diverse student body when those students come to our campus.”

While the college is celebrating diversity and wishes to invite more of it, students of color hope that this effort will be backed by extended resources.