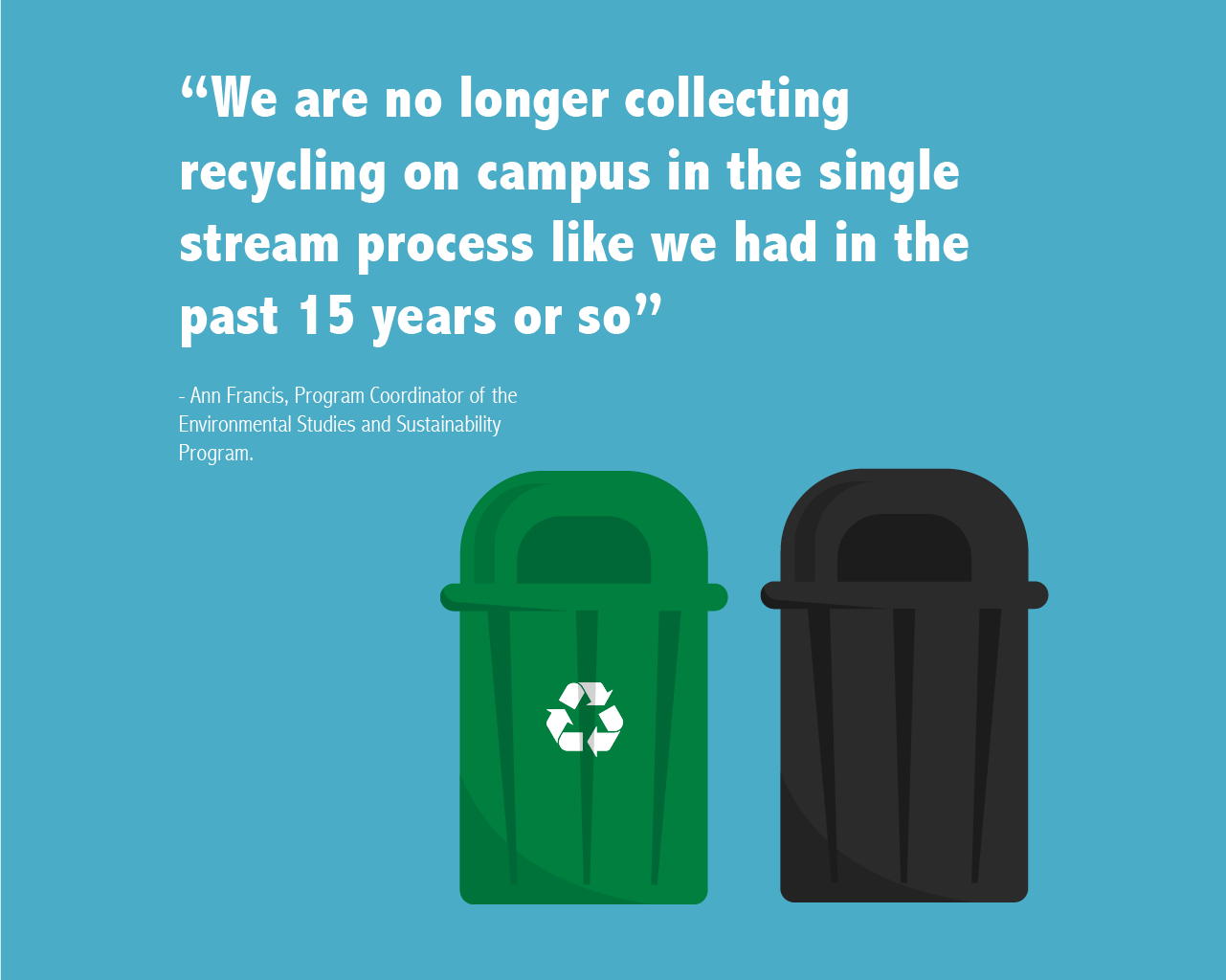 On-campus waste management changes, increase in use of single-use plastics

Rollins’ environmental and sustainability plans have changed to no longer include recycling bins on campus. The changes officially took place before the start of the fall semester and did not include the consultation of Rollins’ Sustainability Program.

Ed Kania, vice president for Business and Finance and treasurer, said, “We relied on feedback from Waste Management–our recycling company–and data from a student honors thesis from 2016 regarding recycling on campus. That thesis concluded that the college had a 62 percent contamination rate in its recycling stream.”

Contamination occurs when any non-recyclable material is placed in recycling bins, including materials that are not capable of being recycled within the Orlando area. Each state and county has different lists of materials deemed recyclable.

The honors thesis, written by Courtney Banker, concluded that the main sources of contamination for recycled materials were the plastic liners surrounding recycling and trash bins.

“We are no longer collecting recycling on campus in the single stream process like we had in the past 15 years or so,” said Ann Francis, program coordinator of the Environmental Studies and Sustainability Program.

For the last 10 to 15 years, Rollins has partnered with the company Covanta to burn some of its trash in order to generate electricity, which then powers part of the college’s facilities.

A new plan with Covanta will now be streamlined, with all of the college’s waste–including recyclables–being burned and turned into electricity.

After incineration, any metal that does not burn will be collected and recycled. In addition, according to Covanta’s website, “all gases are collected, filtered and cleaned to minimize environmental impact.”

The new changes to the recycling program on campus did not include the consultation of Rollins Sustainability. Francis was not made aware of the decision to change on campus recycling habits until after the change had been finalized.

Students on campus may also notice the reappearance of single-use plastics, which had previously been eliminated.

While this was not done as a change of Rollins policy, it was a decision made on a larger scale due to COVID-19. Single-use plastics help minimize cross-contamination and exposure.

“They were brought back this semester due to CDC rules and regulations at schools for now,” said Francis. “We hope they can be eliminated again; plastic is the scourge of our country on the environment, natural resources, and the wildlife.”

Students wanting to get involved with sustainability on campus can look into joining EcoRollins or EcoReps. Students are also advised to remain environmentally conscious and to use personal, reusable items when possible.

“I hope that students will care about what is going on with recycling on the campus. I hope they get angry that we are not recycling,” said Francis. “Take this to the administration where the decision was made […] We have been working for years and years to try to make all on campus more aware of their use of reusables and non-reusables […] I want students to care about what is happening in our nation and on our campus.”