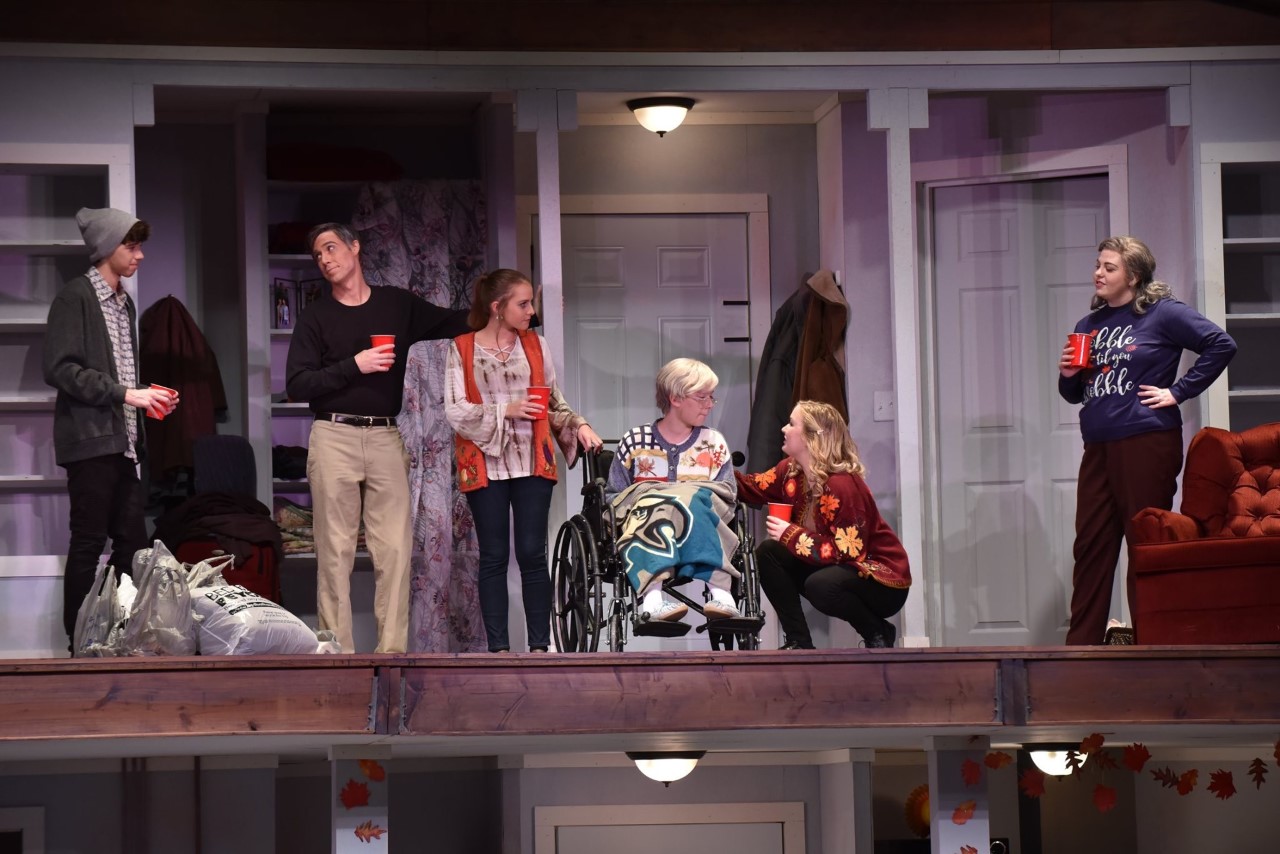 ‘The Humans’ makes Orlando debut at the Annie

The Annie Russell Theatre debuted a spectacular production of “The Humans,” a feat possible due to the talented student cast and brilliant set design that brought the script to life.

“The Humans” is not just a play about a typical family get-together—or maybe it is. The Tony-award winning one-act grapples with the issues plaguing the American middle-class in a raw and familiar form: around the Thanksgiving dinner table.

The play made its Orlando debut in the premiere of the theater’s eighty-seventh season on Sept. 27, centering on the gathering of the Blake family. They are a family of five hailing from Scranton, PA.

The plot begins when the Blake parents visit their youngest daughter, Brigid, and her long-term boyfriend, Richard, in their new, dimly lit two-story basement apartment in lower Manhattan.

The chemistry of the cast was brilliant as it pulled viewers in, held them hostage, and invested them in this incredibly average family.

The mother of the family, Deirdre, played by Allison Furlong (‘20), is caring and compassionate toward everyone but herself. She easily falls into patterns of self-neglect as she volunteers for every possible cause.

She also acts as a caregiver for her mother-in-law, affectionately called Momo and played by Sydney Pigmon (‘20), who lives with Alzheimer’s disease.

Deirdre’s husband, Erik Blake, played by Stephen Lewis (‘21), struggles with the loss of his job, his mother’s illness, marital issues, and traumatic memories. In front of the audience’s eyes, he devolves from a put-together patriarch to a broken man.

The role was quite an undertaking, but Lewis stood out as an accomplished actor as he unfolded the complexities of his character onstage.

Amiee went through a nasty breakup with her long-term girlfriend, and she discovers that she will not be considered for a partner position at her law firm due to her chronic illness.

At the same time, Brigid is struggling to find a fulfilling job after graduating with a music degree and relocating to New York with her boyfriend, Richard, played by Fisher Alexander (‘22).

The play was a technical masterpiece, as the set design, lighting, and sound design came together to form a brilliant ambiance. The set presented theatergoers with a literal cross-section of the Blake family’s life by bisecting the two-story apartment, allowing audience members to feel as if they were intruders in the private lives of strangers.

The apartment itself was a work of art in the most mundane way possible—its dreary lighting, undecorated walls, piles of moving boxes, and dining room card table were convincingly true to life.

Incorporated throughout the plot were elements of thriller, including nightmare stories of faceless women, startling thumping noises, and flickering lights. These features elevated the stress levels of the audience and allowed viewers to tangibly experience the tension and anxiety the actors built over the course of the play.

As the production progressed, the stage became dimmer and eerier, and the loud thumping noises from the imagined upstairs evolved from coincidental and minor to pivotally placed and poignant.

Everything about this play is complex from the plot, to the characters, to the set. The Department of Theatre & Dance tackled it with expertise.

The Annie Russell Theatre brought this nuanced script to life, giving it a heart and lungs to breathe. The production became more than just a play; it became human.