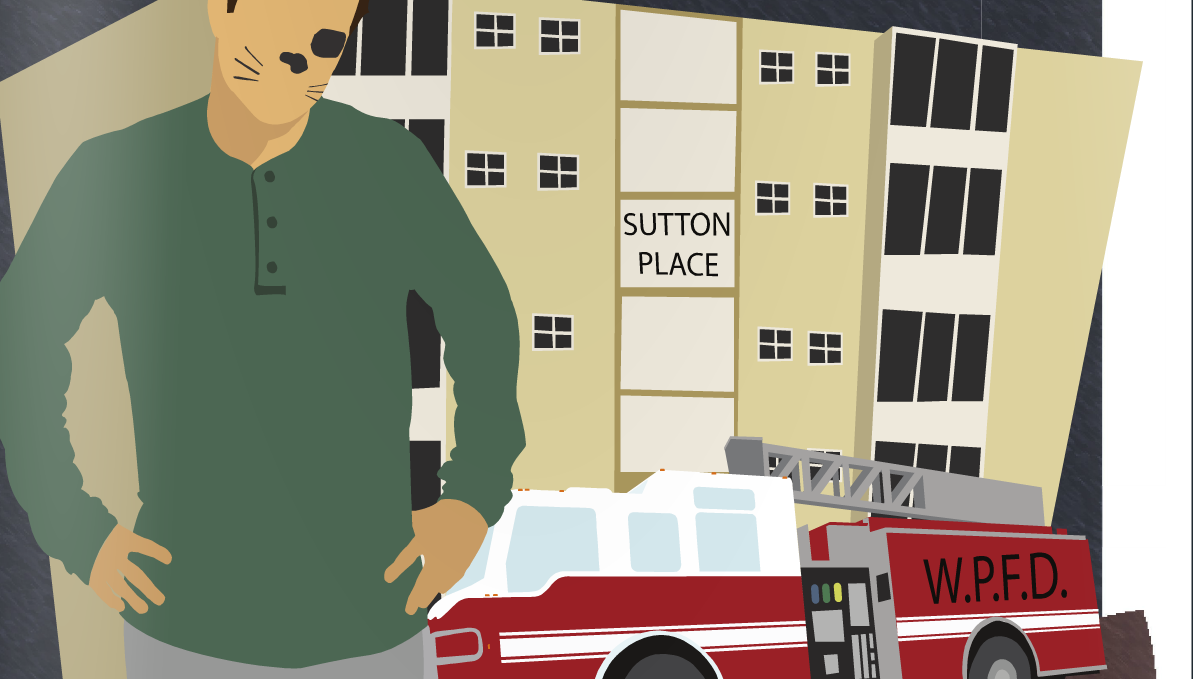 Twelve hours after a Sutton dormitory arsonist had stalked the building’s fifth floor halls sending door tags up in flames, Campus Safety released a “Timely Notification” e-mail to all members of the Rollins community. This message stated that at 3:13AM on Oct. 31 Campus Safety received notice of a fire alarm going off at the Sutton apartments. Following up on the matter, safety officers entered the building to find smoke lingering throughout the fifth floor scene of the crime, noting that material on multiple residents’ doors had been charred. The building was evacuated in a timely fashion and its inhabitants were displaced to Dave’s Down Under. No injuries were reported throughout this process.

Upon securing the scene, Campus Safety then alerted Winter Park Police Department, Winter Park Fire Department, and the Florida Fire Marshal who shortly thereafter all arrived on campus. When a building like Sutton, which is meant to house over 270 occupants, has been placed under arson’s attack, protocol demands that action be taken with the utmost severity. The fire marshal took the lead in their investigation to identify the person(s) responsible for setting these fires. In an attempt to remain thorough, residents of the building were not allowed reentry until three hours later at approximately six in the morning.

Without video surveillance inside of Sutton, the culprit still remains at large. Campus Safety has received an anonymous tip from a witness who saw an SUV sized vehicle speeding away from the scene in the immediate minutes following the alarm.

The investigation remains open and Campus Safety urges those with information to step forward by submitting an anonymous report form that can be found on their homepage. While this crime did not result in any injuries or outstanding damages, all should be made aware of how serious the matter is being taken given that the state of Florida recognizes an incident such as this as a felony.

However, this has not been Rollins’ first run-in with arson. Campus Safety reports that approximately every three years a new arsonist emerges – the most recent of whom was a resident of the freshman dormitory, Mckean. This Mckean arsonist from three years back committed a similar crime of setting residential nametags and corkboards aflame. He was later identified through anonymous tips and punished accordingly for his actions. It is important to note that this earlier case involved a repeat offender that had committed the same crime twice before witnesses anonymously came forward to put a stop to it before a third incident could occur.

As ironic as timing can get, the Florida Fire Sprinkler Association happens to be putting on a demonstration involving fire safety in – wait for it – Sutton dorm’s own parking lot this Sunday, Nov. 10 at 4PM. The display will comprise of two replicated dorm rooms built to approximate scale being set on fire. One replica will have a sprinkler installed in it while the other will have to bare the flames without one. This presentation intends to prove how quickly such a small room will end up engulfed in fire originating from a small open flame. Beyond that, it will demonstrate how working sprinklers are vital to safe dormitory living. It should serve as a chilling reminder to all on-campus occupants as to why we have rules set in place banning candle burning or open flames of any sort from residential buildings.

Additionally, the campus will play host to a tragically enlightened speaker on that same Sunday. This speaker is the mother of a victim who perished in a disastrous dorm fire incident on another campus. All resident assistants will be required to attend, and both the sprinkler demonstration and fire safety talk will be open to anyone on campus. Hopefully such an alarming dose of reality will shed new light upon the true dangers attached to playing with fire in on-campus, pseudo-domestic settings.

With the holiday season just around the corner, students and faculty will soon partake in the traditional task of decorating hallways and rooms with merry-time garnish. But let’s not forget that all it takes is one spark from a Christmas light or unattended candle to send those dry pine needles of an ornamented spruce up in flames – and the building down with it. Proper caution needs to always be taken around this time of year, thus Campus Safety reminds all residents of Sutton Hall to check that their apartment is equipped with a functioning fire extinguisher. If it isn’t, please take the time to report this oversight to your RA.

Bottom-line: how about the unnamed criminal among us simply learns to practice more practicality, eh? Lighting things on fire inside of a building that hundreds of people are asleep inside of is blatantly stupid, reckless, and above all potentially lethal. Perhaps your time would be more aptly spent aspiring toward positive contributions to our collegiate community, in lieu of posing this threat to innocent lives as a door-burning arsonist.