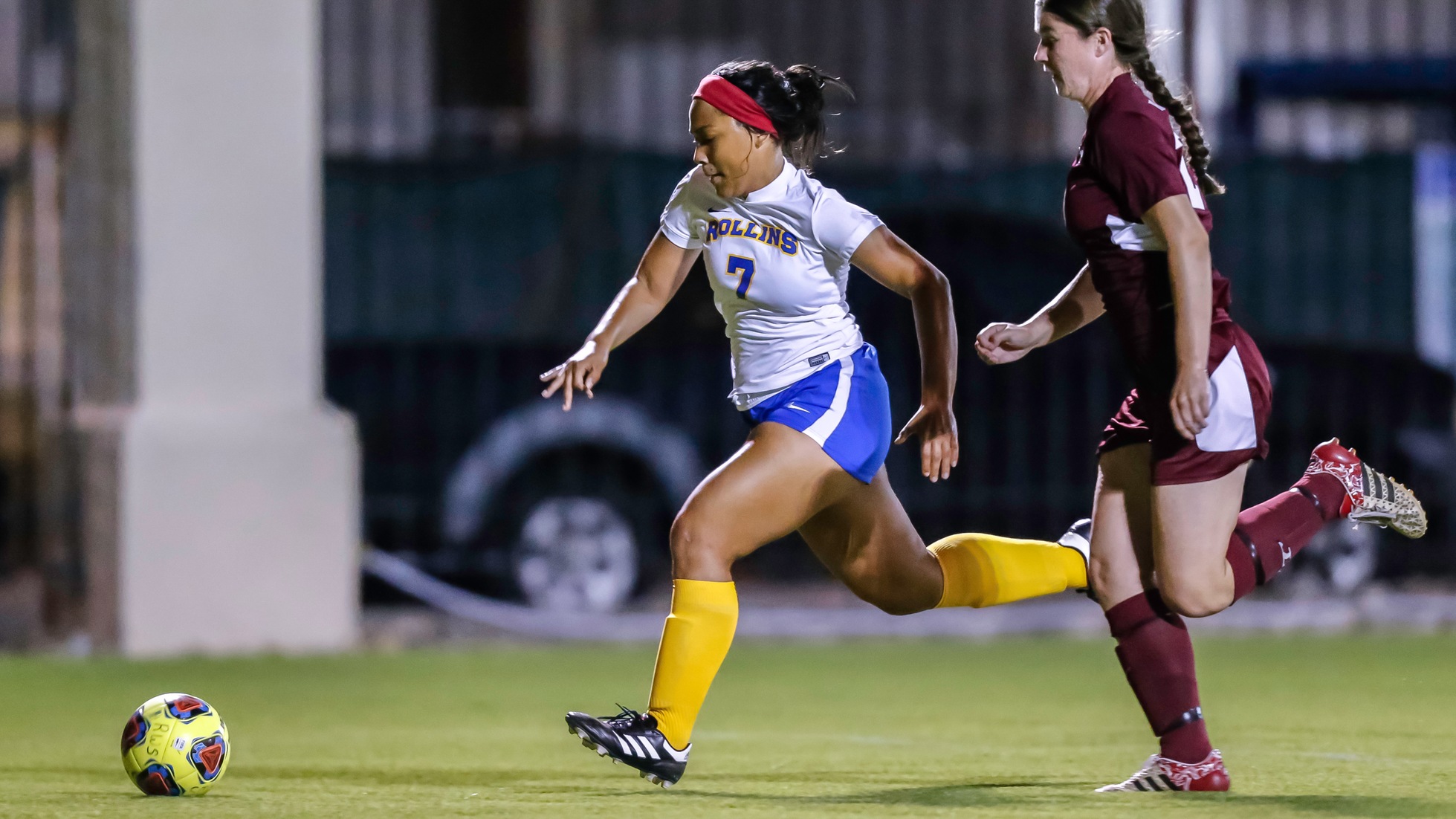 Women’s soccer continued their season’s success with a 1-0 win over Florida Institute of Technology, propelling them into this Thursday’s conference semifinals.

When asked about the team’s first win in the conference playoffs, the typically serious Head Coach Alicia Schuck said, “I think we’re badass!” This was an apt description of the game’s lone goal, a flying kick with the outside of the foot by Chynna McGirt (‘21), following an elegant assist by Kathryn O’Brien (‘19).

“We wish we would’ve got our second goal, but one is sometimes all it takes to win a soccer game,” Schuck said, smiling at the bigger picture in a post-game interview. “We’ve formed this identity that we’re tough, we’re physical, we’re strong, and we like to shoot and try to score goals.”

After a slow start, Rollins dominated the rest of the match, despite notable efforts by the Panthers. For McGirt, author of the match-winning goal, there were scores to settle: “We had to leave it all out on the field. Last season, we did not do very well. This team actually ended our season last year. We were determined to end their season, and in turn, to go as far as possible.”

O’Brien, who scored a brace against Florida Tech last week, inflicted constant chaos among the opponent’s ranks with her explosive incursions on the wing.

Kelly Rowswell (‘20), Sunshine State Conference defensive player of the week, cemented her elite goalkeeping status by not conceding for the seventh game this season, leading the conference in terms of clean sheets.

Kiera McMeekan (‘19) presented a midfield master class with her untoppable duelling ability, countless clearances and excellent positioning. “When we play like that all together, we do amazing. I do well because my teammates do well,” McMeekan said. In a game heavily-battled in midfield, organization is key. “It’s a pressure-cover-balance sort of thing. Most importantly, we play our best when we’re all moving as a unit.”

“It’s tiring,” admitted fellow midfielder Meghan Mosley (‘22), whose versatility proved instrumental against the Panthers. “You want to push through for everyone in your team. Everyone is out there, having each-other’s back.”

As one of only three freshmen, Mosley was particularly appreciative of the team spirit. “Honestly, as a freshman you just want to come in and make an impact on the team, but this team makes it so easy to become a part, push forward with confidence and give it all in every game. It is indescribable, the way you feel after every game, after winning,” she said.

That was not the case at the beginning of the season, according to Schuck: “It is a work in progress… Remember, it’s a really young team. There’s only eight kids on our squad that have ever been to a conference tournament before. Our older kids have just absorbed our new kids. We truly love each-other. Everybody’s respected.”

Unity is crucial for the Tars, especially after last season’s disappointment. “We really got our stuff together in the spring,” McMeekan said. “Everyday we focused and worked on something different. We changed our culture to more of a ‘winning as a team’ mentality.”

McGirt credited the new-found teamgeist with the outstanding season the Rollins frontline is experiencing: “Kathryn [O’Brien] and I both have different abilities. Kathryn is really good on the ball, I am more of a through-ball type person, so we communicate what runs we should make, what balls we should play each-other. And Sarah Buckley (‘20) could shoot for days, so we’re always trying to get the ball to her feet so she can finish it off.”

The Tars travel to Fort Lauderdale on Thursday to face reigning conference champions Nova Southeastern University for a spot in the conference tournament final.

“Every game is different and it’s hard to beat a team twice. We played Nova at the beginning of the season and won 3-1, but we can’t look at past games. Every game is a new game and we’re hoping to do well,” McMeekan said.

Mosley was in a similar wavelength: “We take each game by each game, because every team is just going to give it all. It doesn’t matter how good they are, it matters how much you compete at this point, how much you want it.”

A year ago, talks of post-season were distant. Now, the Tars face higher-seed teams as equals. “It’s in our DNA as a program to do well,” Schuck said. “That we didn’t do it last year, was kind of a hiccup for us. The fact that we’re playing well reminds our team that, yeah, this is what Rollins’ women’s soccer really is about.”