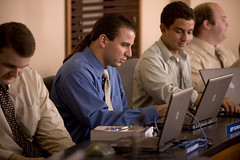 The issues specifically affected rising seniors, who choose their courses on the first day of registration. Additionally, there was a delay in the release of next semester’s course schedule, which did not come out until the weekend before advising appointments began, causing a rushed process for advising and course selection.

The course schedule that allows students to plan what classes they want to take was released late due to an issue with the manual input of available courses into the system. Jennifer Cavenaugh, dean of faculty, said that for both fall and spring semesters, about 1,500 courses need to be manually entered.

Each department and its administrative assistant is responsible for inputting courses into the course schedule. However, an error occurred, and faculty names and course prerequisites were not put into the schedule. As a result, “the registrar and her staff had to enter all of the department information manually. This caused [a] delay in the schedule,” said Cavenaugh.

The English department experienced a particular inconvenience. “We have a cross-listed program, so we do a schedule for the day program and for the Holt program,” said Paul Reich, associate professor and head of the English department. Reich said that when the administrative assistant was adding the courses, she was unable to schedule any classes at 6:45 p.m., a prime course time for the English department, which has majors and minors in both the day and night schools.

Inconveniences like these caused the delay of the course schedule.

Then, once registration opened for seniors on Tuesday, April 2, more unexpected factors occured with the roll-out of an updated software system.

“Our current vendor stopped supporting Banner 8, our previous registration software in December, so we did not go shopping for new software; we just implemented what our vendor provided us with,” said Henning.

Last fall, the Office of the Registrar and the Information Technology team began working on Banner 9, the new registration software. Although the office planned to introduce the new system in November, it felt rushed and decided to delay the implementation until this spring.

The Office of the Registrar tested the new system with Student Government Association students and Holt students, but the office could not predict how the program would operate under real conditions.

“Everything in the testing phase was just wonderful. What we could not test and didn’t find out was how the load would impact the servers,” said Henning.

“We were getting error messages that did not come up in the testings,” said Henning. Her office is now taking pictures of students’ screens and showing Rollins’ vendor these errors that they may not have encountered before.

When these issues occurred, the registrar’s office asked students to register the old-fashioned way and hand-write their course numbers on the registration form; the office would then manually put students into their classes.

Jade Grimes (‘19HH) tried to register, but she said that the new system wouldn’t submit her classes. “I had Banner errors when I tried different methods… and it took four days to figure out what was wrong.”

CLA student Hannah Brakeman (‘20) said, “After the first day failed, I still had trouble on the second day. It took me an hour and forty-five minutes to get the classes I needed. It took two different computers, around fifteen attempts to enter the site, and a trip to student records.”

The change in programming and appearance is also what threw some students off. Nicky Lindenberg (‘20) said, “I didn’t know the system was going to be different at all. Since they also sent the tutorial after I tried to register, I didn’t know if my registration even worked.”

According to Henning, the new self-service registration is meant to offer a more intuitive registration process. There are other features of this registration software that the Office of the Registrar will disclose in the future.

“It allows for you to plan out your schedule two or three semesters in advance, at the least the courses that you think you want to take,” said Henning.

Regarding the training process, Henning considered the new registration software to be very intuitive and simple, just by watching the training video that was sent out to students via email.

“We could have put out a 20 minute training video, but students from 18 to 25-year-olds don’t watch anything more than three minutes. If you made it to Foxlink, you are going to follow those steps,” said Henning.

Henning said she has never encountered an issue like this before in her 20 years of experience. “We definitely learned a lot in this process. We learned that communication is really important and acting swiftly to make sure that the process is not disrupted for any length in time.”

On the fourth day of registration, Henning said, “We did not have a single student come in with a registration issue. At 9:01 a.m., we were standing around going ‘wow.’ With other days, the students were lined up and the line was going through the hall.”