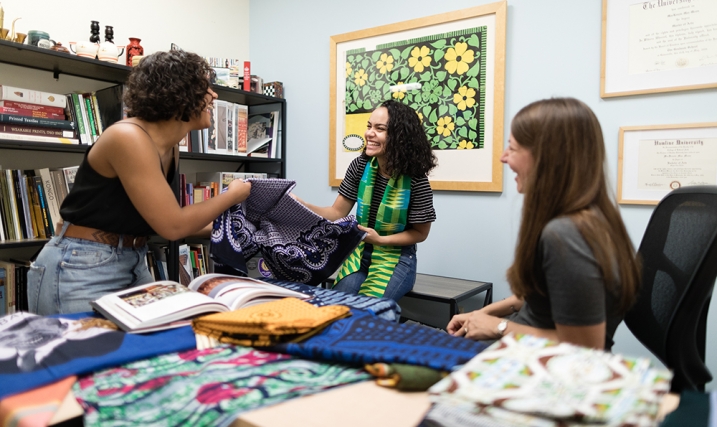 For the first time at Rollins, a professor of art history collaborated with students to curate an exhibition at the Cornell Fine Arts Museum (CFAM).

“African apparel: Threaded Transformations of the 20th Century” is a project that began two and a half years ago and has finally opened its doors this spring.

The collection made its way into CFAM  as an attempt to represent African apparel’s diversity, artistry, and complexity.

Ryan said, “I recruited both Morgan and Cristina, and I didn’t so much ask permission as share my idea and dedication to involving students at every step in the process with both CFAM director, Ena Heller, and the collector, Norma Canelas Roth (‘65), who lent the lion’s share of artworks.”

Toppin, who is a political science major and emerging curator, said, “It was such a nice process, from drafting the catalog, researching, writing, and choosing the pieces, to setting up supporting programing and gallery layout.”

After taking a class with Ryan, Toppin was offered the position as co-curator of the art collection.

Toppin said, “I came into the project not really thinking that a museum or art would be in my future, but after working in this exhibition, I see how museums and art want to give a social justice and political message, and this has changed my opinion as to how I can achieve my goals of empowering other people through art.”

On the other hand, Snoap, art history student and co-curator, said that Ryan had asked her if she wanted to be involved in the exhibition during her sophomore year. She found the inspiration to become an art history major while in high school.

“I took an Advanced Placement Art History course in my sophomore year of high school and loved it,” said Snoap. “Then, I finally decided to follow my passion.”

The pieces in the exhibition were provided by Rollins alumna Norma
Canelas Roth (‘65) and her husband, William Roth, who contacted Ryan to suggest exhibiting their objects.

Ryan said Roth “was very excited that Rollins had hired someone to teach art outside the western tradition, so we started talking about an exhibition at the CFAM with her objects.”

Ryan added that she wanted to combine her expertise of African art with students to showcase pieces that are often not seen at CFAM.

“My area of focus is textiles, clothing, and women, which was not well represented at the CFAM […] Oftentimes, when people think about African art, they think of masquerades or sculpture, and it was really important for me to broaden that understanding and broaden people’s perspective about the complexity, diversity, and artistry of the way people have dressed in Africa.”

The curators and participants at CFAM called the opening day of the gallery a great success.

Ryan said, “On the day of the opening, we had so much fun unveiling all the hard work and effort we put into it, and looking at how this evolved from our own intellectual endeavor into a final product […] was an outpouring of joy; we had a big attendance that day, and that’s why we did all this, to share.”

Snoap also shared her excitement for completing the project: “As an undergraduate, to have co-curated an exhibition and to inspire my future research, and also to be published in a book at the age of 21, is so exciting to me […] It is an honor to have been part of this, and I’m happy about how it turned out.”

The exhibition at CFAM opened its doors to the public on Jan. 18, and it will be open until May 17. Admission is free to all students.