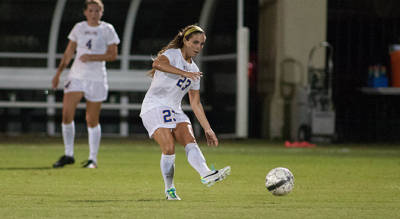 Last year’s national champs lucked out on Friday, but the resilient Lady Tars came back to blank the Cardinals on Sunday.

If you were around campus on Friday night, you likely heard the resounding cheers of tons of fans lining our stadium to watch the Lady Tars battle it out with reigning national soccer champs, University of West Florida.

The highly anticipated and incredibly intense game would, eventually, end in an ill-fatedly marginal difference in score– Tars, 1 and UWF, 2.
UWF took the lead early, scoring twice in the first half. After halftime our Tars came back with a vengeance, Mora Johnson ripping a shot that proved successful and scored within the first 7 minutes of the second half. On their way to evening things up, the girls lost some luck when the game was called off for a chance of lightning while twenty-six minutes still remained on the clock.

After approximately an hour of waiting, they resumed play–but the pivotal momentum they had gained following halftime was stolen away from our Tars with the long weather delay. The score held steady at 1 to 2 as Brenna Mckee took one last shot in the dwindling moments left to play. Our Rollins athletes, unfortunately, were left defeated.

…the girls put forth valiant and impressive efforts

However, this was in opposition with their game less than forty-eight hours later on Sunday morning. The Tars walked away the dominant victors over Texas team Incarnate Wood, who were recently demoted from Division I. The girls played strongly to defend their domain through the entire 90-minutes of play, yielding a final score of three to zero.

Their first goal was scored by captain Brenna Mckee. The second and third goals were scored by Junior, Emma Jones and Freshman, Paxton Sickler.

The girls put forth valiant and impressive efforts throughout their two games this past weekend. When you see members of the women’s soccer team around campus, be sure to congratulate them on Sunday’s win.

As for the rest of their home games this season, let’s always give these hard working ladies the benefit of a consistently inspirational fan-base and fully packed stadium.