On Tuesday, the men’s soccer team aggressively played Eckerd College. Every five minutes, the referee blew his whistle due to a foul and two red cards were issued. The Rollins Tars and the Eckerd Tritons gave it their all throughout the game. A few players showed off some skilled moves and made the crowd go wild, but for it would take more than a few trick shots to win this game, as the stakes were higher than any previous face-off. This game would decide who receives the coveted spot in the Sunshine State Conference Tournament and continue in the season. Eckerd opened the score with a goal in the sixth minute, forcing Rollins to turn up the pressure. Ben Grant ’18 headed in the equalizer off a cross from Jordan Cole ’17 just after the 16-minute mark. 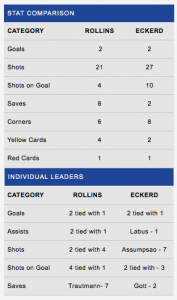 The two teams continued to battle back and forth for most of the second half, but no one could score; every shot barely missed. Finally, Cyrus Siminou ’19 found the back of the net off of Stefan Avram ’19 assist, giving the Tars a 2-1 lead. Eckerd clawed their way back when one of our own players took a red card in the 85 minute, allowing the Tritons a goal. At a tie, the game moved into overtime, Eckerd controlling much of it. Ultimately, however, the conference rivals had to settle for a draw.

The next day, the Rollins women’s soccer team played Palm Beach Atlantic and celebrated 11 seniors. Palm Beach Atlantic got on the board first, but the Tars responded fast. Some sloppy touches and miscommunication from Rollins gave Palm Beach the opportunity to create excellent attacks, but the Tars maintained great defense. Later in the game, Kat Weiss ’18 headed in the equalizer at the 32-minute mark, after a perfect cross from senior Mackenzie Miller ’17. The Tars pulled ahead for good in the second half when Paxton Sickler ’17 and Emma Bloom ’17 infiltrated Palm Beach Atlantic’s defense with thorough passes before Sickler ’17 buried the ball in the open net. There was no doubt it would be a goal; however, with close view, it could have been an own goal by a defense player from the opposing team. Kelly Rowswell ’20 fiercely made a save that could have tied the game. Palm Beach kept our defense on their toes but, in the end, could not beat our lady Tars. The game ended in a Rollins victory, as the crowd cheered on into the night. Make sure to attend the next home games in support of another Tars victory.