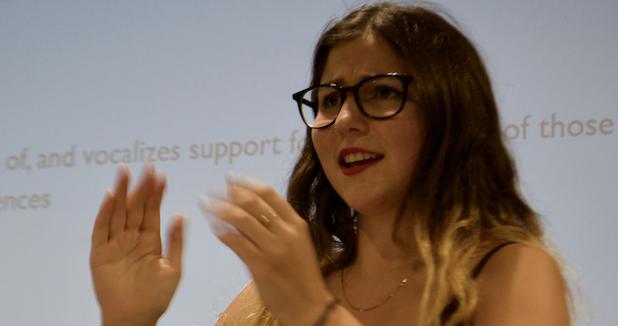 Voices for Women changes its name to Voices

“I feel like our organization has really been seen and portrayed as white cis women, but that’s not the issues that our organization tackles, and that’s not, like, who represents our organization,” said Kenzie Helmick (‘20), co-president of Voices. She said this portrayal has become an issue among people who do not identify as women.

“A lot of people who do not identify as women feel as if they can’t come to our club or like they’re not invited,” said Niles Shajee (‘20), Voices co-president. “So we wanted to change it to Voices so that everyone’s voices can be heard at our meetings.”

The group has created its foundation by rallying for intersectional feminism—as well as a variety of other social issues—and has continued its mission of inclusion into the current school year. On Sept. 10, the Rex Beach Hall classroom began filling with students preparing for the first Voices club meeting of the year.

Students join the organization for a variety of reasons, including to understand the voices of others. “The reason why I joined the club was sexual health and wellness, whether that be menstruation or actual sex ed. and that kind of thing. Even though we’re all in college, I feel like there’s a lot of people who come from backgrounds where they don’t have that education,” said Shajee.

Giselle Negron (‘20) said she joined the club last year after being a feminist for years. “I wanted to see what kind of different perspectives there are,” she said.

“I plan on coming back for the rest of the meetings this year,” said Donna Dormeus (‘21) after attending her first Voices meeting. “I liked the discussion we were able to have.”

While the organization’s name has changed in practice, on paper and online the club remains as Voices for Women.

While the name of the club has changed, its content and goals have remained the same. The club still discusses social justice issues applicable to anyone who defines themselves as a feminist, regardless of how their opinions on certain subjects may compare to others.

“I definitely think that it’s the kind of place where you can share your opinions without being criticized,” said Negron. “It’s a very welcoming environment.”

The club plans to continue hosting meetings at the Rex Beach Hall classroom on Tuesdays at 12:45 p.m.