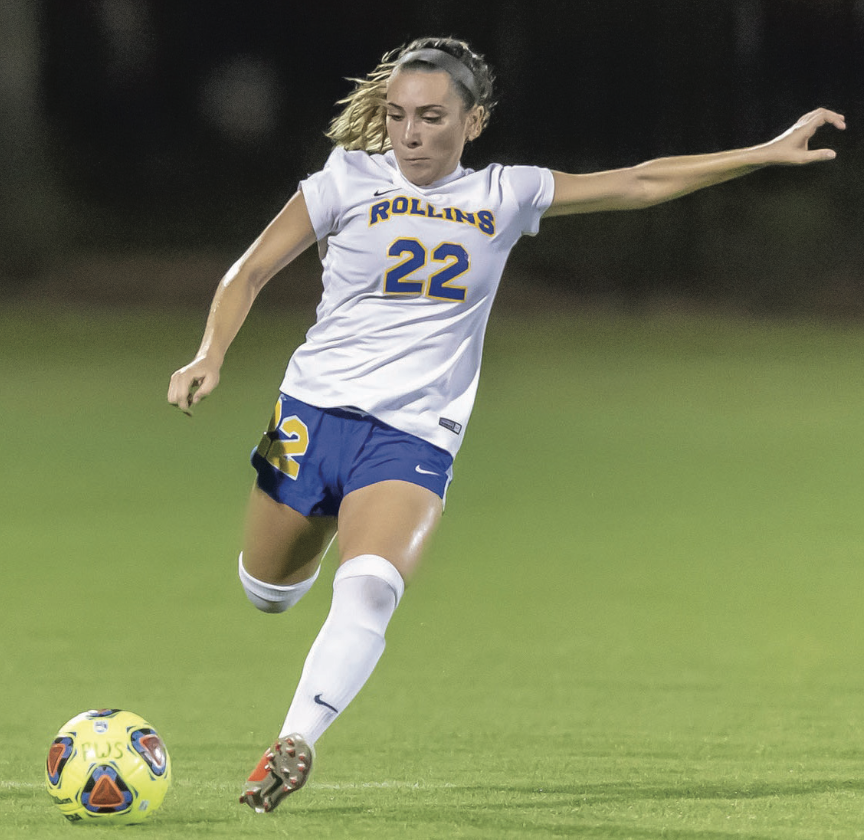 Although the women’s soccer team was knocked out of the conference tournament by Nova Southeastern University, they were selected as fifth seed for the regional tournament.

They will face Lee University on Thursday, a team they faced early in the season which ended in a 2-2 tie.

The team’s 3-0 loss in the conference semifinals last week made their regional fate unsure. It was dependent on the University of West Florida, which is 20-0 on the season, to win their conference championship. Should the Tars defeat Lee on Thursday, they will face West Florida on Saturday.

Last Thursday’s loss came down to Rollins’ inability to score. As the unwritten rule of soccer goes, if you do not score, you will concede.

Five minutes before the end of the first half, a shot born out of the defense’s distraction somehow found its way into the back of the net. In the chaotic aftermath of the first goal, Nova managed to grab a second. The Tars came out aggressive in the second half, but lacked efficiency in front of goal. After the Sharks’ third goal, Rollins pressed even more fiercely, but it was too late.

The women’s soccer team came into the 2018 season highly motivated to prove that last year’s disappointment was an abnormality. After rigourous spring preparations, there was great anticipation for September’s games. Following a pair of draws in the beginning, the Tars crescendoed as the season unravelled.

Rollins held their own against No. 9 Lee and No. 5 Columbus State, with their only loss in September resulting from conference-leader Barry, which happened in overtime. The Tars’ only other loss came against Embry Riddle, who coincidentally crashed out of the conference tournament in the semifinals against Barry.

Coach Alicia Schuck preferred a four-four-two formation in the game, placing her trust in a core of fixed starters. It worked, as the Tars played a balanced style of soccer, relying as much on counterattack and paced wingplay as they did on gradual pressure build-up.

Kelly Rowswell (‘20), the only keeper in the roster, offered stability between the posts. Her stats speak for themselves: with a 0.874 save percentage and 76 saves in total, it is no surprise the junior from Windermere was chosen First Team All-Sunshine State Conference.

Rowswell had a compact defense in front of her. The center-back partnership between Molly von Eschenbach (‘21) and Shalisa Crowell (‘19) illustrated this perfectly. Similarly, the likes of Kayla Crosby (‘21) and Gianna Merigliano (‘21) as wingbacks added a lot to the Rollins game.

Midfielder Jill Richards (‘19) had her best season in a Rollins jersey, leading the team in assists (six) and points (14). Her four-goal tally placed her in a comparable spot with the forwards. Richards represented a guarantee in front of goal from the penalty spot.

However, statistics can sometimes be misleading. Looking strictly at the numbers, one may not fully appreciate the contribution of Olivia Talmage (‘21) to the team. The midfielder engaged in seemingly-perpetual motion, covering the flank with authority, aiding both in offense and defense and helping organize collective movements.

Between the two of them, Kiera McMeekan (‘19) and Meghan Mosley (‘22) provided the engine for the Tars’ game. McMeekan’s positioning, anticipation, duelling, interceptions, and overall strength were inspiring. The senior also found the back of the net three times throughout the season.

Mosley, on the other hand, immediately established herself as an adept freshman. Covering almost every inch of the field, she helped relieve pressure from the defense and constantly pushed forward. Although unsuccessful, her distance shots tested the opposition’s goalkeeper on many occasions.

Katie Evans (‘22) was another new addition to the team that contributed significantly to the Tars’ progress.

The strength of the women’s soccer team lies in squad depth. Megan Welliver (‘19), Rebecca Volk (‘22), and Ally Rost (‘20) consistently left the bench to influence the outcome of the game or help manage the score. However, Sarah Buckley (‘20) deserves the power-sub recognition. Having played every game, despite only starting in three of them, Buckley is tied for second-most goals in the team with five.

Rollins is blessed to have an attacking duo like Kathryn O’Brien (’20) and Chynna McGirt (‘21). They have constantly assisted each other to help propel O’Brien to six goals and McGirt to five.

The two complement one another: O’Brien creates space with the ball on her feet, dribbling past defenders, and McGirt creates space with her off-ball movement, latching on to through-balls. Just when the opposition thinks they have got it figured out, the two switch, creating all kinds of problems for the opposing team. The combination makes for some fun-to-watch soccer.

The Tars are undefeated at home this season, but perhaps their greatest victory lies beyond tangible scoresheets. They have used the humility from the previous season to march towards success with dignity and comradery. Most importantly, this cohort did not just live up to the reputation of the program-—they created their own.