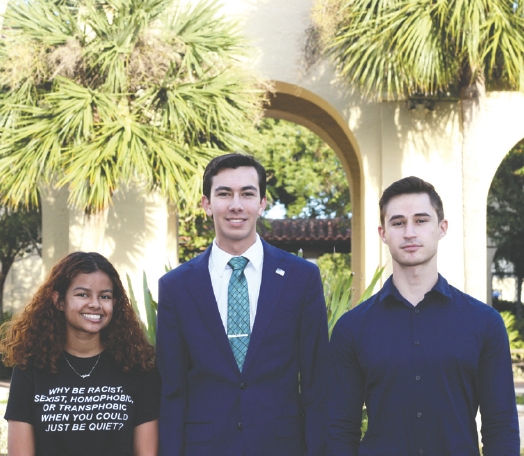 “The new positions were created to help better represent departments/offices that are heavily involved on campus, but underrepresented,” said Matthew Weiner (‘20), president of SGA.

Four out of five of the positions are filled with an elected senator. The fifth position, the External & Competitive Scholarships position, was assigned as temporary senator by Weiner.

While the positions were expected to be filled at the election on Oct. 23rd, the timing of the elections may have contributed to low turnout.

Additionally, recruitment for these positions lasted only a week due to the nature of the legislation that created them. The election date also fell on the week of midterms, which may have influenced potential candidates’ decisions to run, said Weiner.

Elliot is the Institutional Advancement senator who is “in charge of annual giving, donations, donor relations … basically making sure that we have enough income from the community through giving that we don’t need to raise tuition every year,” said Elliot.

Lessne, the new Holt Graduate senator and Holt student herself, is excited “to be able to observe the programs that we have and to be able to match them better to our graduate school population,” said Lessne. She added that this position was formed because graduate students requested to have representation in SGA.

Silver is the Campus Safety & Security senator. He is looking forward to proposing new ideas to Campus Safety such as “improv[ing] campus lighting at night” and “overhauling the key card system so that students may use their smartphones for access,” said Silver.

Weiner said, “He will be in charge of meeting with Dr. Jay [Shivamoggi], who is the director of that office, on a regular basis to then report to SGA on any events, programming, updates, and news for External and Competitive Scholarships for the college.”

Finally, Torres is the Sustainability senator. She is excited to “work closely with the sustainability program” and is “most looking forward to building relationships with faculty and students involved in the program and SGA,” said Torres.

The offices represented by these new senators “are always looking for student opinions and voices,” said Weiner, “and SGA is almost always the first student organization that they seek for feedback.”

The positions are year-long commitments, and Weiner expects them to stay in the following years.

Weiner said, “Senators had  to write legislation amending the constitution to add these new positions, [so] they will be available next year as well, unless a constitutional amendment is made to discontinue them, which is something I do not see happening.”