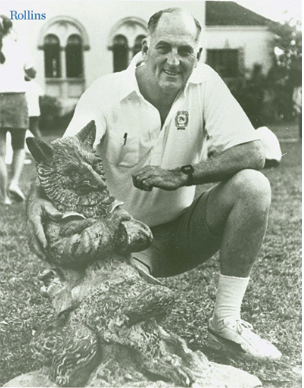 ‘At Rollins one person can make a difference’

Following his death, faculty and staff remember Dr. Thaddeus Seymour, former professor and college president, for his acts of kindness and contributions to Rollins College and Winter Park.

Sinclair said that Seymour was known for his fun-loving personality. Sinclair said he watched Seymour perform slight-of-hand and rope magic tricks in a red-and-white coat on several occasions.

In 1979, Seymour defended a controversial Annie Russell Theater performance of “Equus,” which included a scene where two characters were naked.

Dr. Jack Lane, college historian, laughed when he remembered, “Dr. Seymour and the students at Rollins did not want to see the play get shot down, so they went out on the streets marching and holding signs that said, ‘Seymour wants to see more!’”

Seymour obtained an injunction from the city of Winter Park that decreed the play could remain.

In addition, Seymour was known for encouraging others to become better people. He kept silver dollars in his pocket to give to people whom he saw doing good deeds on campus.

Micki Meyer, assistant vice president of student affairs, once received a silver dollar for picking up trash. She said he often did this in the 1980s to help keep the campus clean.

“A few years ago, Thad gave me a handful of silver dollars and asked me to continue to recognize acts of service across Rollins,” said Meyer.

She added that she was close friends with Seymour: “Quite simply, Thad was as close to an angel living among us that I’ve ever known … He brought out the best in everyone,” Meyer said.

Dr. Pedro Bernal, chemistry professor, remembered that Seymour used a metaphor about the polarization properties of atoms to understand other aspects of life.

“It is as if he wanted me to recognize that chemistry could convey insights that transcended the chemistry content,” Bernal said. “Rollins was lucky to have him, and those of us that were fortunate to know him are forever in his debt.”

President Cornwell remembered Seymour for his improvements to campus.

“His legacy is one of having tremendous positivism, believing that Rollins can always become a better school,” Cornwell said.

When Cornwell began his tenure, he was able to build upon what Seymour left behind.

“The college was much stronger; we owe a great deal to Dr. Seymour for putting the school forward,” Cornwell said.

Seymour began his presidency when Rollins had lost its commitment to liberal arts education, “but Seymour preserved and believed in the integrity of the liberal arts college mission,” said Cornwell.

Lane quoted Seymour in his book titled “Rollins College: A Centennial History,” in which Seymour said, “Rollins must return to its roots. Our aim is to know ourselves and to be known by others as the finest small liberal arts college in the southeast, standing among the finest colleges in the country.”

Outside of academia, Seymour advocated for community-oriented programs in Winter Park. He co-founded the non-profit Habitat for Humanity, which builds houses for people in need.

Hal George, a founding member of Habitat for Humanity, said, “Thad was my partner … He was the face of the place, and he treated everyone so nicely. That is why everything was so successful.”

Seymour passed away at 91 years old. His memorial service took place at the Knowles Chapel on Sunday, Nov. 3.