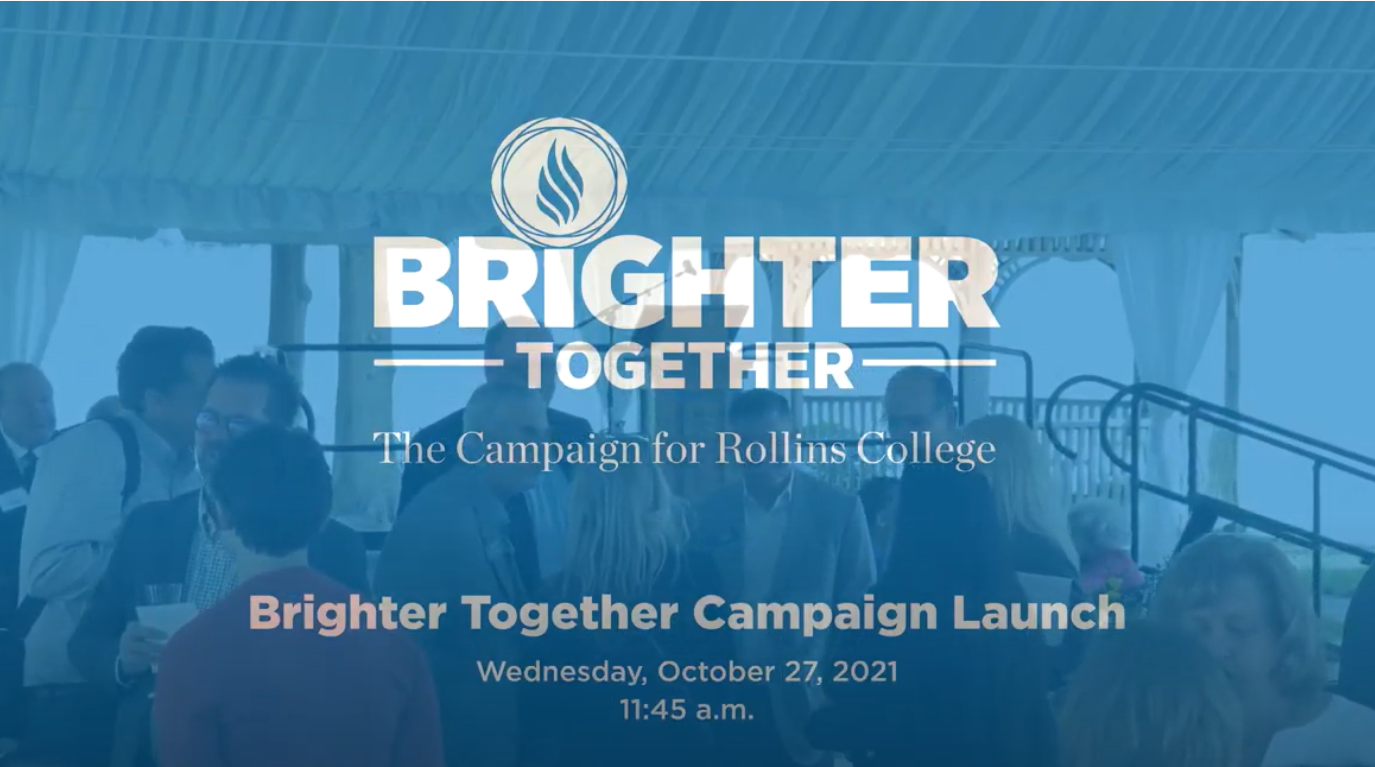 Breaking: Rollins raises more than $270 million through Brighter Together campaign

During the public launch of Rollins’s capital campaign on Oct. 27, President Grant Cornwell announced that Rollins has raised more than $270 million over 10 years via the private phase of its Brighter Together capital campaign. Rollins’s goal is to raise an additional $35 million via the campaign’s public phase by Dec. 31, 2022.

The public phase of Brighter Together officially launched during a live streamed event on Oct. 27. President Grant Cornwell, along with Campaign Chair Allan Keen (‘70 ‘71MBA ‘10H) and Cristalle Choi (‘21), unveiled the campaign during the live stream.

Those who attended the event included the Board of Trustees, Alumni Advisory Board, Crummer School Board of Overseers, Holt School Board of Advisors, and Rollins Museum Board of Visitors. Rita Bornstein, Rollins’s 13th president, and Polly Seymour, wife of 12th president Thaddeus Seymour, were also in attendance.

“With a clear commitment from the Rollins community […] we are assured that the legacy of Rollins and its education that we produce will impact the future generations and be secure,” Keen said on stage.

As the Brighter Together campaign is now public, anyone in the community can make a donation. It will run for a total of 14 months through December 31, 2022.

Brighter Together marks the launch of Rollins first capital campaign since 1999. According to its website, the capital campaign serves students through five “guiding lights:” academic strength, scholarships and financial aid, applied learning, the Rollins Annual Fund, and the innovation triangle.

“All of the campaign’s goals are essentially tied to supporting our students, now and in the future,” said Myrna Bizer, vice president of Advancement.

“This campaign is considered a comprehensive campaign which will provide funding for many areas that support students,” said Bizer. “The capital portion has supported transformative building projects undertaken through the college’s 2017-2021 Strategic Plan, such as Kathleen W. Rollins Hall and Lakeside Neighborhood, with the purpose of assuring that our programs have the facilities they need to fulfill their work […] In addition, financial aid and scholarship funds are a high priority for the remainder of the campaign.”

One of the most recent donations was pledged by Philip and Siggy Tiedtke, who increased their initial donation of $3 million to $5 million toward a new theatre and dance facility at Rollins. It will be known as the Tiedtke Theatre and Dance Center.

“Overwhelming support of our priorities has been confirmed by our donors who have voted with their philanthropy,” said Cornwell during the live stream. “The chemistry of the most inspired giving is a simple equation: the donor sees an initiative that has a meaningful personal connection, and the college delivers on an institutional priority.”

“Students can also get involved by participating in mentoring and internship programs with our alumni volunteers through the programs offered by the Center for Career & Life Planning,” Bizer said.