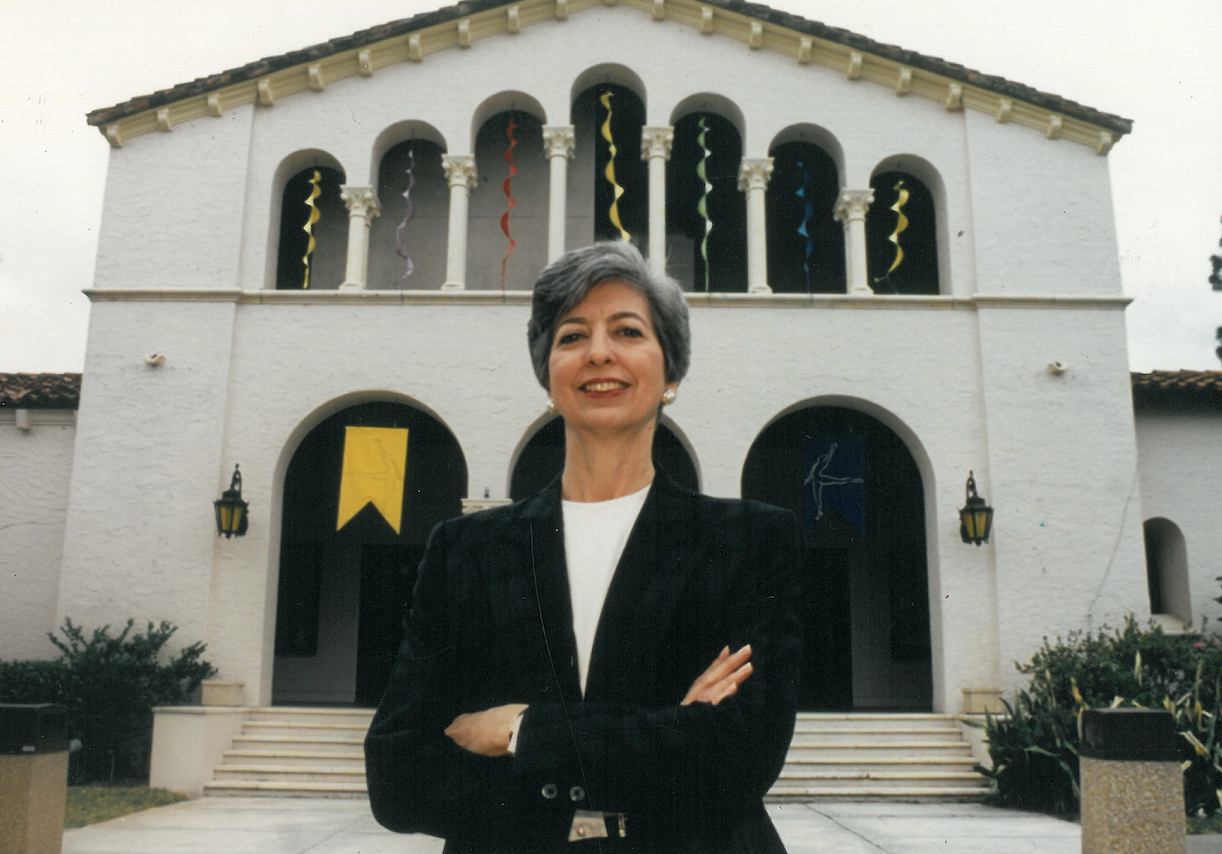 As a young girl, Rita Bornstein flipped through textbooks and found images of women baking and posing with the latest kitchen utensil. Turning the page, she contrastly found photos of men donning tuxedos while discussing their extensive business accomplishments and education.

While some young women were brainwashed by the stereotypes and sexism of twentieth-century America, Bornstein was not—she tossed aside those standards and took a liking to academia. Bornstein went on to earn her doctoral degree and eventually became Rollins’ first and only woman president.

“I knew that some people would have to learn that women could be good leaders and good decision makers,” she said. “I worked hard at the job, did not respond to disparaging comments, and made some important changes at Rollins.”

From 1990 to 2004, Bornstein led the College, pushing for gender equality through the enforcement of Title IX, building and renovating many buildings, purchasing more property, and raising the institution’s standards for admission.

She brought Rollins’ regional ranking up six spots, and in 2004 the U.S. News and World Report named Rollins the No. 1 regional university in the South. The College has held this ranking ever since.

Since Bornstein was a little girl, she was interested in higher education, but never thought she would become a college president. “I wanted to make a difference for young people and open up the world for them. It seems like the most important responsibility one could have.”

Born in New York City but living much of her life as a Florida resident, Bornstein earned her B.A. and M.A. degrees in English literature from Florida Atlantic University and earned a Ph.D. in educational leadership from the University of Miami. She also directed the U.S. Office of Education Technical Assistance Center at the University of Miami to implement Title IX and gender equity policies.

Growing up, Bornstein said that Eleanor Roosevelt was the source of her own inspiration. “She was such a strong woman. I admired her sense of obligation to making life better for all and her indefatigable efforts to improve people’s chances to succeed.”

Bornstein’s accomplishments can be accredited to personal empowerment and what she believes was a huge shift in society following the establishment of the Title IX act in 1972, which forbade discrimination based on sex in any federally funded educational program or activity.

During her time as president, she also raised the standards of the campus, from faculty evaluation to student testing scores.

Bornstein proved to have incredibly savvy business and fundraising skills. She received numerous lifetime achievement awards for her work, from nonprofits to journals. She also wrote books such as “Legitimacy in the Academic Presidency: From Entrance to Exit,” and other publications on presidential succession, planning, and fundraising for higher education. She also directed multiple corporations throughout her career, such as Tupperware Brands, Barnett Banks, Inc., and NationsBank.

Due to her Campaign For Rollins fundraiser, the college raised a total of $160.2 million, providing support for academic programs, scholarships, faculty, and facilities.

“When I came in 1990, I found that people had ambitious dreams for the future but no money to implement those dreams,” she said.

Bornstein’s leadership changed that. Under her presidency, the College’s endowment quintupled. She had similar financial success when she was vice president at the University of Miami before she came to Rollins, where she led one of the most successful fundraiser campaigns in the history of American higher education.

At the end of her presidency, the Winter Park Chamber of Commerce named her ‘Citizen of the Decade.’

Bornstein recalled her time at Rollins fondly and believed it opened new opportunities for women on campus. “I had a pretty wonderful presidency and I loved every minute of it,” she said. “I think that because of my presidency, it encouraged other women to have a voice.”

Like many students, her fondest memories of the campus come from the tradition of Fox Day. She recalled when  her and her husband had taken the day off together and joined everyone back at campus for the picnic, getting the opportunity to talk to students in a casual way, which she did not always get the chance to do. “I loved meeting interesting people,” she said.

Women’s History Month means a lot to Bornstein, and she believes it is especially important to keep celebrating it now with so many more women advancing in society, citing the multiple women recently elected into Congress. Bornstein believes it was Title IX in 1972 that has now allowed so many women to reach their full potential.

“Before then, people didn’t remember the achievements of women; at that time, there was only opportunities for men. Women had to be equal, but men had all the advantages and I remember text books all showed women baking and men out in the world doing and making things,” she said. “We women who worked to bring Title IX into law changed everything and that’s the reason so many women today are in the military, law school, medical school, sports, and are some of the most accomplished people in the world,”she said.

“put up your fists and fight for what you want. Don’t let anyone walk over you.”

After leaving Rollins, Bornstein has continued to be active in the Winter Park and Orlando community, serving on the Boards of Directors for the United Arts of Central Florida and the Dr. Phillips Orlando Performing Arts Center. She is currently recovering from influenza.