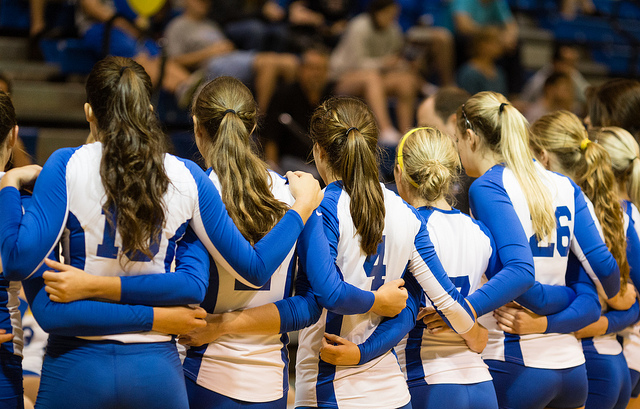 Hits and misses for the volleyball team

Rollins’ volleyball team traveled to Barry University last Friday, dropping a tough back-and-forth battle on the court. According to a report from Rollins Sports, after taking the first two sets 25-14 and 25-18, the Tars could not close out the final set to the Bucs and lost the next three, 25-22, 25-19, 15-9.

However, Rollins refused to let the disappointing match ruin their game-filled weekend. The following day, the Tars traveled to Nova Southeastern to sweep the sharks 3-0, improving to 5-8 overall and 4-5 in Sunshine State Conference action while dropping the Sharks to 4-8, 2-6 SSC.

Outside hitter and team captain, Bri Civiero ‘18, totaled 16 kills, ranking her fifth in the SSC for kills, with Shannon McDonough ‘18 following close behind at seventh. Cassidy Cason ‘20 had 43 assists, making this game another platform for her growing skill, placing her at third place in the SSC for total assists. Sam Schlesman ‘18 put herself out there with four block assists.

Head coach Mika Robinson told Rollins Sports writer, “We did a nice job of playing both aggressively and efficiently on offense today, and any time you can get a 3-0 win on the road in the Sunshine State conference it’s a good day.” This is Robinson’s second season with Rollins.

After a string of losses at the beginning of the season, Rollins’ volleyball has made it their personal mission to make history in whatever way possible. This was seen last week with a win against University of Tampa, a team Rollins has not beaten since 2010.

“Coming in as a freshman, beating Tampa was something I told myself I wanted to work towards by the time I graduated,” said Mary Bethany Vincent ‘18, one of the team captains. “As the dedication and hard work was put in over the past three years by my coaching staff and teammates, it was great to win but it has been something we expected from ourselves for a while.”

In the game against Tampa, Civiero had an impressive 17 kills. McDonough had a total of 16 digs, and Cason earned 44 assists in the game. Vincent led the way with 5 blocks and 4 kills herself, while Madison Jenkins ‘20 pulled off a solo block along with two other blocks. The game ended with a 3-1 score.

When asked about what she sees in the future for her and her teammates, Vincent responded, “I’m confident we are heading down the path we need to be in order to make it as far as we hope into the national tournament. The focus and dedication all 19 of us have been bringing to workouts and practice are enabling us to make great strides each week in preparation for conference games. It’s hard to ask much more from my teammates, but we all expect each other to have belief in our end goals and to bring our best each day.”

The Tars next home game is against Lynn University on Thursday, October 19 at 7 p.m. For more information on the Rollins volleyball team and their fight to earn ranking in the SSC, visit rollinssports.com.