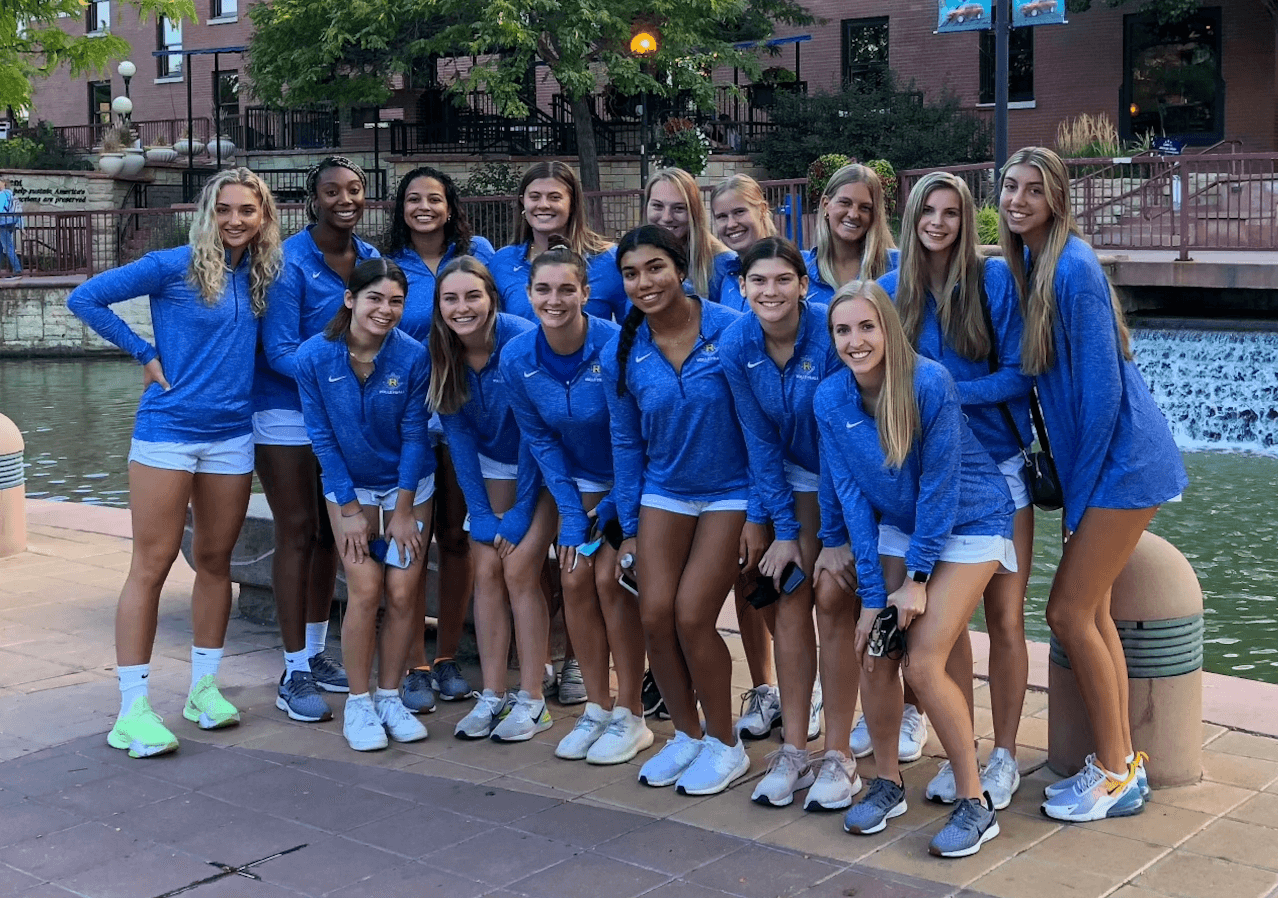 Rollins Volleyball emerged with smiles, wins, and above all, momentum from the Steel City Showcase, hosted by Colorado State Pueblo.

After a hiccup during the first game against the tournament hosts, the Tars stole wins against University of Mary, University of Minnesota Crookston, and Chadron State, taking 3-1 for the season.

Right side Riley Spurlin (‘23) wore a Tars jersey for the first time in 22 months and picked up right where she left off, leading the team in kills. Outside hitter Emily Diaz (‘24), who led the team in scoring during the makeshift spring season, posted solid performances upfront while continuing to sting opponents with her aces.

For setter Rebecca Kuehn (‘22), who posted 118 assists over the weekend, there is strength in numbers. During the COVID-19 season, the Tars constantly traveled with eight players, which meant only one person on the bench.

“Last season, everyone had to be ‘on’ all the time,” Kuehn said. “If you were having an off-game, that’s just too bad because everybody is going to play bad now. But with 19 people, we have all the depth we need, and our potential and possibilities are endless.”

This has helped foster a special kind of dynamic, said libero Jessika Linnemeyer (‘22). While the Tars have high expectations of one another, they are also grateful to have several teammates that are ready to step in when things are not going well, she said.

The closing game against Chadron State encapsulated Linnemeyer’s sentiment. After being 2-0 down, the Tars rallied to complete a tantalizing comeback. This victory was in huge parts thanks to Milla Sherman’s (‘24) aces and clutch swings, as well as Tess Margio’s (‘25) huge blocks — two lesser-deployed, yet equally talented squad members.

The Tars’ reliance on the team, rather than individuals, was tested from the pre-season getgo, as team captain Marlee Johnson (‘22) sustained a fully ruptured ACL.

“While we were all very shaken and felt bad for her, she set the precedent that the team is still the priority,” said Linnemeyer, who has since been elected captain, together with Spurlin and Johnson. “She is there for us in any way that she can, and that allows us to keep playing and working hard for her. I do think it had an impact on us, but it also motivated us to work harder.”

Rollins played in this tournament without four critical players. In addition to Johnson, Ashley Russell (‘24) was unable to play due to a broken nose, whereas Abbie Tutor (‘24) and Kaylee Tutor (‘25) were quarantined.

The trip meant a little more to Linnemeyer, a Castle Rock, CO native who attracted a small, yet proactive fan section of family and friends.

“To be able to show my team where I’m from, my hometown, and all these views that I have grown up around was very special and made it possible to enjoy our trip at the same time as playing volleyball,” she said.

So where does it go from here?

“With any team, the easy goal would be to go undefeated or win every single game, but we are in one of the most competitive conferences in Division II in the nation, so that wouldn’t be realistic,” said Kuehn. “Our tangible goal would be to have a winning record, to always play with all of our effort on the court, and that in turn will determine if we make it to the NCAAs, win a title or who knows.”

As captain, Linnemeyer’s goals are simple: always put the team first, while solidifying team culture and values for the next players.

Kuehn said, “Yes, part of the goal of our program is being a good athlete and doing good on the court, but another big part of our program is to develop excellence in women. So my goal is to become who I want to be as I move on to pursue things past college.”

Some teams have those heavy hitters or big players that carry them, and of course Rollins lacks no talent, as Kuehn, Diaz, and Spurlin graced the all-tournament team.

But what stands out to Head Coach Mika Robinson is the equal share of credit that everyone has in this achievement. There were those that dominated, there were those who came off the bench and saved the day, and even those who did not set foot on the court shouted valuable contributions.

As Linnemeyer said, “These are the greatest team wins we’ve ever had. You can’t point to any single person or group of people to attribute these wins to, and that’s something I want to keep building off of.”