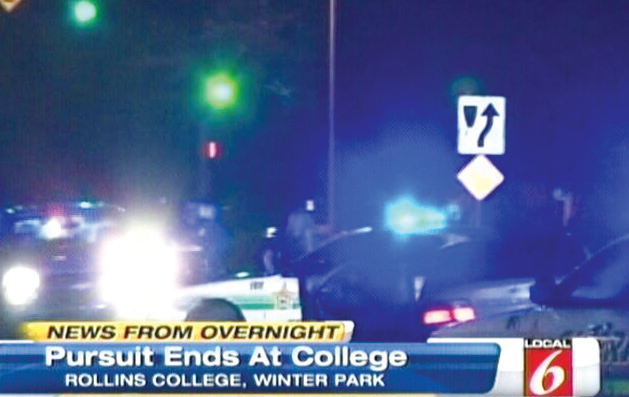 In the Midst of Threat

“No one knew what was going on. I was scared.”

Courtney Bianculli ’13 learned via Facebook early Monday, Sept. 19 that a gunman was loose on campus. In the next 30 minutes, students expressed their confusion, fear and anger online. Was there one man? Two? Three? Did someone actually have a gun? Was the campus under lockdown? Were the men after someone in particular? Am I going to die?

While some students were barricading themselves in their rooms, others were walking around campus excitedly searching out the suspects within the borders of the police perimeter. “What was most disturbing,” commented Bianculli, “was how the students had a false sense of security the whole time.”

Even after campus wide emails had been sent to the student population, many do not know what actually occurred between midnight and one in the morning that Monday.

So what is the real story? Shortly after midnight, Seminole County Sherriff’s Officers were pursuing a vehicle they believed was stolen during a shooting in Sanford. Three suspects ran to Winter Park, abandoned their vehicle, and fled the scene. According to Director of Campus Safety Ken Miller, the vehicle the suspects were in was not the car the officers had been originally pursuing from the Sanford shooting; the car simply had a similar description. Two men came onto campus near the soccer field off Fairbanks Avenue, while a third man, a passenger in the car, traveled north. This man never entered campus and is believed to have just been a passenger whom the police are not actively pursuing at this time.

As soon as the two armed men stepped foot on campus, Seminole County officers, the Winter Park Police Department (WPPD), and Rollins Campus Safety worked together to solve the situation, sealing off all exits to the campus and shutting down Fairbanks Avenue. The two suspects were quickly apprehended, and two weapons were found on campus and turned over to WPPD.

After additional security patrols of the campus by WPPD and Campus Safety, the campus received an all-clear at 12:50 a.m. Fairbanks reopened at approximately 1:45 a.m., and emergency response units did not leave the scene until 2 a.m. to ensure the safety of the scene. On Tuesday, another firearm was found by a Rollins staff member near the scene of the incident. It is believed to be related to the events of Monday morning.

The incident itself raised a lot of conversation, but the larger concern amongst students was the way they found out: Facebook. Many students in public locations, like the Grille and the 24-hour lab in Olin Library, did not know anything happened until the next morning or much later that night. Where were the mass text messages promised in case of an emergency?

Started in fall of 2007, according to the Rollins website, “the OUTREACH emergency notification system offers Rollins the ability to notify students, faculty, staff and parents of emergencies via phone and/or e-mail.” Upperclassmen received a text using this system during last spring break regarding a gas leak near campus.

When Campus Safety tried to make contact with the City of Winter Park that night to utilize OUTREACH, the City of Winter Park ran into some unforeseeable problems with the system. There was one person who had the ability to fix the problem, and although that person has been reached in the past, could not be found on Monday. “They had problems reaching the person who had the most knowledge and information to make it work,” reported Miller. “Our practice and our plans have always been to contact Winter Park Dispatch. It has worked well in the past; we run regular tests. For whatever reason, this time they were unable to reach a very dependable individual who has been with the city for a long time.”

In order to stop this from happening again, administrators and Campus Safety met with the city of Winter Park Monday afternoon. The OUTREACH system has changed slightly, so that Rollins College now has full access to it. Currently, one individual on campus has the ability to send outreach messages to all students. In the near future, five administrators will have access to the system.

In addition to the updated OUTREACH process, the same five people will have draft s of emergency-situation emails on their computers at all times which they can use to email the appropriate populations at a moment’s notice about any situation, so, should there be any issues with OUTREACH again, a backup system is in place.

“We have put these two future safeguards in place to prevent this from happening again,” stated Miller. Resolving the issues that night “was really a combined effort. Everyone did a very great job working through the communication issues as well as making sure students stayed safe, especially Greg Fischer, Anthony Vargo, Karen Hater, Leon Hayner, Meghan Harte, and Laurie Joyner. Many different departments worked together to make sure students stayed safe.”

Dean Joyner, mentioned above, came onto campus after the incident, stopping by a few residence halls to provide students with a sense of security. “I wanted to be available and visible to students on campus to assure them that the campus had received the all-clear message from law enforcement and campus safety officials. Our highest priority is always the safety and wellbeing of our students.”

“Nobody got hurt, and we learned a lot from this incident; there are many things we and the city need to do differently,” said Miller. “You don’t always drill on things that you believe should be taken care of by the city. We will address the issues, get better, and definitely learn from the situation.”