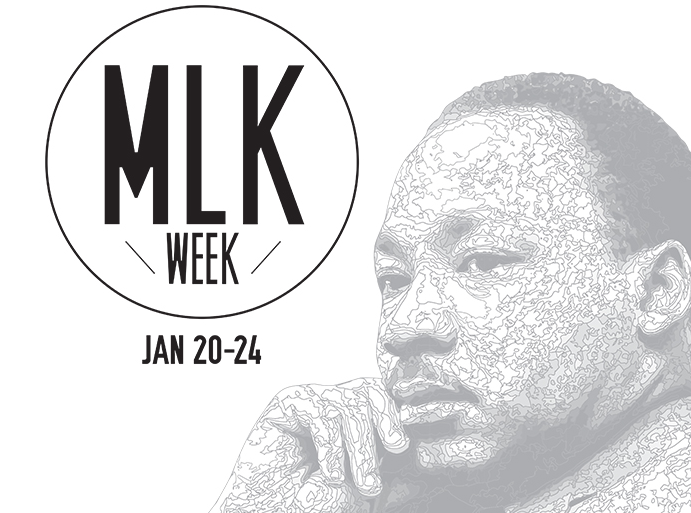 Martin Luther King, Jr. is up there with Gandhi and Jesus. His impact on the world is renowned; his peaceful fight for equality changed history forever.

Dr. King is celebrated on the third Monday of January each year, around the time of his birthday. At this time each year, the Office of Multicultural Affairs (OMA) honors Dr. King and his legacy through MLK week, a series of service and education events that incorporate teaching Dr. King’s message.

“The community should see that remembering is only done appropriately with actions. Accordingly, attending an event such as MLK week provides spaces of reflection and understanding on the universal values that Rev. Dr. King not only advocated for, but lived by,” says Camilo Garzon ’16, a student coordinator in OMA. “And most importantly is the matter of recognizing what he knew since the start of his life for service: everything is connected if one tries to transform issues into better circumstances. But that change starts from our internal nature as we are our own potential limitations. Thus, to transcend those limits, and become better humans, is the pathway to actualize the dream”

Collete McLeod, a graduate assistant in OMA agrees that people need to understand and embrace Dr. King’s message– “Many people were social justice advocates during a time when that could have meant they would lose their lives—yet they fought for equity anyway. Rev. Dr. Martin Luther King, Jr.’s teachings, and the teachings of the vast number of advocates that aided in his success, are not just relevant in a historical sense; this week will give the Rollins community the opportunity to contextualize some of what they see in their everyday lives and the ways in which people in this day and age are advocating for social justice and equity.”

A preview of the MLK week events is provided below. All events are put on by OMA except for the Sharon Robinson evening talk and stone laying ceremony. See photos of MLK Week 2013 here.

Equality Forum: Civil Rights in the 21st Century
Discuss current events, including the Defense of Marriage Act, the Voting Act of 1965, immigration reform, and disability laws, and their effect on the fight for equality. Guest panelists include attorney Mary Meeks, Sister Ann Kendrick from the Hope Community Center, the Orlando Chapter of the National Action Network president Temia Brinson, and ACLU representation John “Jack” Jordan.

The Modern Day Slavery Museum
Stop by the mobile museum, a replica of a cargo truck that is used for human trafficking of farm workers. The exhibit tells the stories of immigrants who are mistreated as farm workers in central Florida