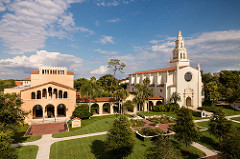 Review: Students shine in ‘John Proctor is the Villain’ debut

If John Proctor is the villain, then the actors are the heroes.

The Annie Russell Theater actors dove headfirst into their debut of “John Proctor is the Villain,” bringing the challenging new piece to life.

In collaboration with the Farm Theater in New York, the Annie Russell Theatre company tells the story of a tumultuous Southern high school English class as they analyze Arthur Miller’s “The Crucible.”

In the play, the effects of the #MeToo movement make their way into the small Appalachian Georgia town. This brings a new perspective to the literature that they all thought they understood.

Raelynn, Beth, Ivy, and Nell struggle to start a feminism club as sexual assaults come to light within the community. All the while, their estranged friend Shelby returns from an extended and mysterious time away from school. Fear of ruined reputations, broken friendships, and not knowing who to trust all make this class’ club much more than just an assignment.

A script is a show’s skeleton; a cast must breathe life into it. Standout leads Raelynn, played by Kristen Edwards (‘20), and Shelby, played by Allison Furlong (‘20), formed the heart of the show. The two had palpable tension, but they also had natural chemistry as the story progressed.

English teacher Mr. Smith, played by Josh Scott (‘19), held significant and consistent throughout the play. Even though the whole cast was comprised of college students, Scott distinguished himself as an older, more authoritative presence in the school, which became significant in the narrative.

Artis had an unmatchable energy. She delivered lines with calculated purpose, inviting difficult discussions and diffusing tension with humor.

As new student Nell, Artis provided an outsider’s perspective into the lives of protagonists Raelynn and Shelby. Unafraid to call attention to herself, Artis carried Nell with confidence and natural grace.

Alexander succeeded in making Mason Nell’s natural opposite. His jittery, smart-but-lazy demeanor shone through beyond his written part. He made it clear with his line delivery and body language that Mason does not try very hard at anything until he finds something worth striving for. Though the supporting cast, as an ensemble, lacked chemistry and energy every so often, the two brought both levels up significantly.

Campbell similarly rose above her station in her part as a young teacher. As a comparatively older character, she successfully separated herself from the students while still retaining the insecurity of the struggle into authority and adulthood.

Much like last semester’s show, “Twelve Angry Jurors,” “John Proctor is the Villain” had a raked (i.e. slanted) stage, no microphones, and a stationary set (save for the students’ desks). The raked stage allowed for visibility of the whole cast and set, while the lack of microphones is an Annie Russell tradition and challenge for the company. It requires actors to project their voices, as well as draw attention in other ways to convey who is speaking and keep the story flowing.

Also a constant is the technical crew’s ability to excel when they could settle. The classroom setting was crisply painted and decorated down to the last detail. The lighting of the show was not only functional but extremely detailed. Lights flipped on and off as actors moved the light switch on stage.

However, the most notable detail was the changing ambient light outside of the classroom window. The light changed in relation to the time of day, successfully conveying time jumps from a few hours to the next day (supplemented by a sliding whiteboard with the date written in the corner).

Taking on a play and subject as heavy as “John Proctor is the Villain” and the #MeToo movement, and making it into a cohesive play is definitely not an easy task, but the cast fearlessly stepped up to the plate.