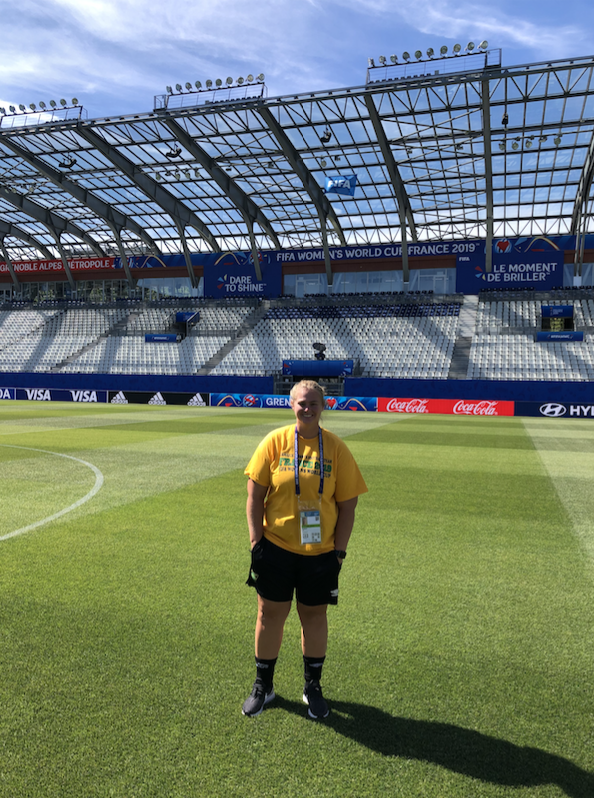 Numerous U.S. fans trekked to France this summer to witness Alex Morgan and her teammates defend their world title, but Sarah Buckley (‘19, ‘21 MBA) participated in the World Cup in a more unconventional way.

“It’s the biggest stage,” Buckley said of the World Cup. “You think you’ve seen it all, but this is different.”

Buckley was a versatile member of the technical staff of the Jamaican National Team, providing input in meetings and conducting scouting.

She also set up the training sessions and ensured the players had the proper gear, serving as something between a player and a coach.

“Sometimes I was an extra body in practice. Pretty much anything you can think of, I did it,” Buckley said.

With the entire world watching, every detail of the experience was scrupulously planned.

“There is a schedule in the locker room with the exact times things are supposed to happen, down to the last minute.” They don’t want you early, either. You have to be bang on time,” Buckley said.

Once, the team was about 45 seconds late to work-outs, and “[FIFA] freaked out and started knocking on our door,” Buckley said. “It was crazy, but it’s a World Cup after all.”

A distinguished member of the Women’s Soccer team at Rollins, Buckley was instrumental in last year’s postseason stretch, which saw the Tars make it all the way to the regionals.

“I worked for [Menzies] at Florida Kraze Krush, a local club,” Buckley said. “It was one of those situations where they needed help, so they called me.”

Upon receiving that call, Buckley dropped what she was doing. She had less than 24 hours to prepare, not knowing if she was going away for a day or, as it turned out, seven weeks.

Naturally, Buckley’s participation in the World Cup came with its challenges. The players’ dialect, she recalled, took some getting used to, and the stadiums were deafening, even during warm-ups.

She quickly realized coaching was only one of many logistical aspects, and it was impossible to control everything. She described those World Cup weeks as stressful and sleep-deprived.

However, when asked about the fun parts of the experience, Buckley described them as life-changing.

“The night before a game, we got to visit the stadiums and walk around,” Buckey said. The first walk-through was an emotional one. “It was unbelievable. I was crying. It’s hard to explain. If you had been there, you would have known what I mean. It still gives me the chills. It was a dream come true,” said Buckley.

She experienced a similar feeling when Jamaica scored its first World Cup goal.

“I was actually on the bench that game,” Buckley recounted. “It was one of the proudest moments to be part of. It was historic, my favorite part of it all.”

The moment was so special because of the odds that the team had endured up to that point. Five years before, the Reggae Girlz were disbanded by the federation after failing to qualify for the 2015 World Cup. They were resurrected, but the coaches still have not received any wages.

“It goes to show the heart of this phenomenal staff. They love their country and see soccer as a way of giving back,” said Buckley.

Meanwhile, she sees a bright future for the relatively young Jamaican team.

“It was eye-opening, on and off the field for them, and me too. Nerves played a part, yet overall they handled it well,” Buckley said.

Buckley finished her business management degree at Rollins and is starting her master’s.

“I’ve already accepted a graduate assistant position at Florida Southern University, starting January. As far as Jamaica, I hope I can still be involved with them or their youth systems,” Buckley said.

When asked if she sees herself coaching at Rollins one day, she said, “If the opportunity presented itself, I would definitely look into it. I played here, my dad played and coached here; Rollins is in my blood. Someone once told me I’m a lifer. I think that’s what they call it.”