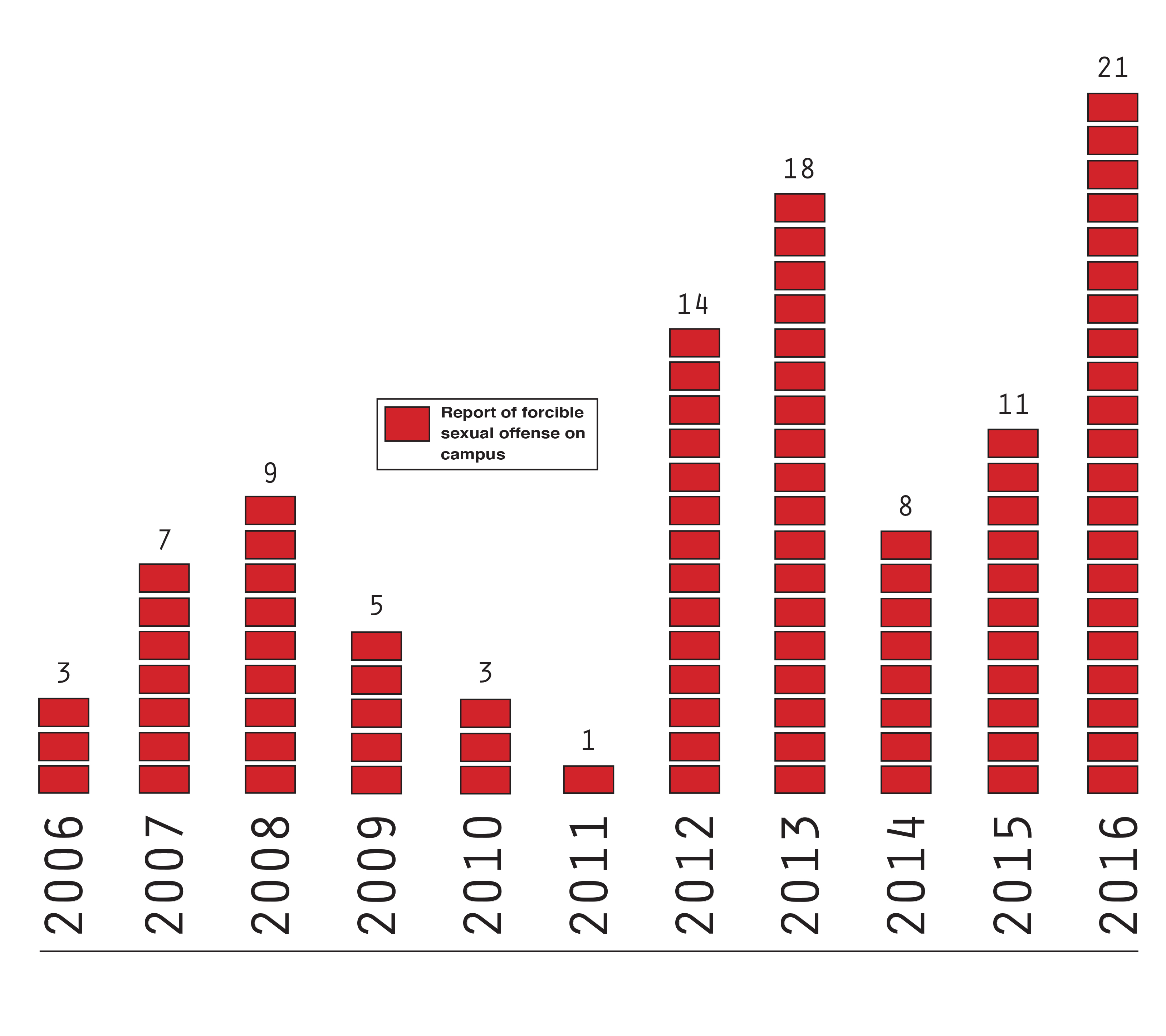 Sexual assault reports on the rise

Sixteen rapes were reported on campus in 2016, a number which doubled the 8 reported in 2015.

The numbers were released through Campus Safety’s 2016 Annual Safety & Fire Safety Report in compliance with the Clery Act. They raise the question of whether this dramatic increase is due to an increase in rapes themselves, or an increase in survivors reporting their experiences.

When considered in isolation, the increase in reported rapes may be alarming.

When asked about Campus Safety’s view on the statistic, Ken Miller, Vice President of Public Safety, emphasized that the statistic reflects only the reported number of rapes on campus, rather than the number that actually occurred.

“Similar institutions that have residential housing with statistics of less than 2-3 reported rapes per year probably are not capturing the full picture of what is happening on their campuses,” Miller added.

The increase in reports followed the instatement of Oriana Jimenez as the Title IX coordinator in 2015 and coincided with a multitude of efforts to improve the campus climate surrounding unwanted sexual contact.

A 2015 Campus Climate Survey found that 31 percent of students who experienced unwanted sexual contact told no one, while just 6 percent used the college’s formal procedure for reporting such incidents.

This report spurred a number of initiatives to increase the willingness to report in 2016.

These efforts included the addition of a Title IX disclosure statement on all syllabi, among other training and education efforts for all incoming students.

The increase in reported rapes since the 2015 report was released hopefully indicates a change in that ratio.

In a 2016 interview with Rollins360, a campus magazine, Oriana Jiminez said, “…the primary reasons Rollins students don’t report sexual misconduct is because they fear they will experience negative social consequences on behalf of their peers.”

“Over the past several years, Rollins has strengthened its Title IX infrastructure based on best practices across the higher-education industry,” Jimenez added in her 2016 statement on the initiatives.

Rollins utilizes a “trauma-informed social justice and prevention model that reaches far beyond minimum compliance with the law. This is critical to creating the climate of respect and care that we seek to foster in our community,” Jimenez added.

Ken Miller expects the number of reported incidents to continue to increase in coming years as campus culture surrounding rape and sexual assault improves, as well as the reporting process becomes more and more accessible to survivors.

Miller is hopeful that the number of reports will eventually peak, and that a decrease in reports from that point on will reflect a decrease in total incidents occurring.

Rollins’ student body is hopeful about our changing campus climate. Karina Barbesino ‘19 comments, “The fact that students are becoming more comfortable reporting rape on campus is a step in the right direction. Now that Rollins is getting a clearer picture of what is happening in our community, we can’t deny that it is a serious problem. The next step is to address it to a greater extent and push forward more initiatives in order to prevent future assaults.”

Nationally, sexual violence is one of the most underreported crimes. A 2010 study by the U.S. Bureau of Justice Statistics found that only 15.8 percent to 35 percent of all sexual assaults are reported to the police.

However, while historically, the overarching percent of reports are  low, Rollins’ consistent efforts to make the campus safe and inclusive for survivors continues to improve these numbers.