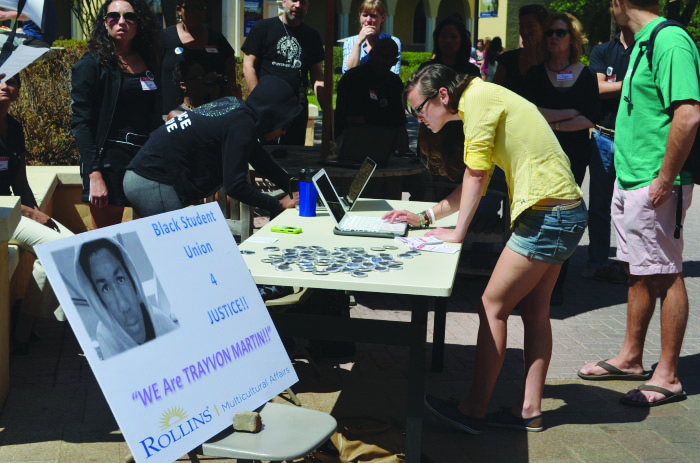 The local Trayvon Martin tragedy has become national news since his shooting Feb. 26.

In response to this, the Black Student Union (BSU) organized a rally Tuesday, March 27 outside of the Campus Center, where students could come together and show their support for Martin and raise awareness.

Director of Multicultural Affairs Mahjabeen Rafiuddin said, “I teach a class once a week, and when I went to the class and asked the students if they knew about Trayvon Martin, about 90 percent did not know what was going on, even though Sanford is right down the road. The rally is an effort to make students aware of what is going on.”

While the lack of student knowledge about the tragedy is unsettling, students who are following the story and attended the rally have a strong passion for raising awareness.

BSU member MyTien Doan ’15 said, “I definitely feel that not only does this promote justice for the Trayvon Martin, but it allows the campus community to unite as a whole behind an important issue.”

Additionally, Makaella Smith ’15 said that she thinks the rally “is a good effort. What [Zimmerman] did is wrong and he needs to know that.”

One of the biggest arguments when discussing Trayvon Martin is whether or not the shooting was a product of racism. With regards to this Dean Powers said, “There is another issue involved: anyone we think is different has an aura of suspicion around him or her… we avoid that person, stigmatize that person. That is wrong.”

The Trayvon Martin shooting occurred less than 30 minutes from the Rollins campus. With something of this magnitude happening so close to home, it is important for our campus community to be educated on the topic.

On Monday April 16 at 6:30pm a Diversity Dialogue based on the stand your ground law and its correlation on racial profiling will be held. If you would like to know how you can get involved, contact Mahjabeen Rafuddin or BSU President Michael Cardwell ‘13.

For more images from the rally, check out this post.