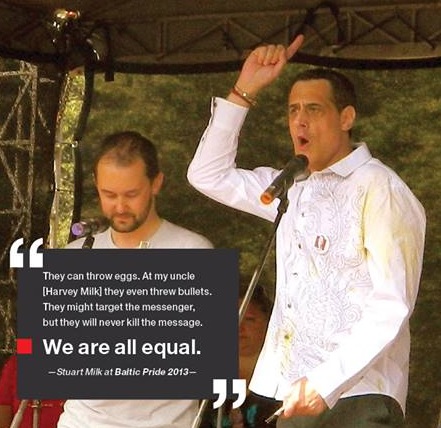 From Tijuana to Praga with the LGBT

“We are all equal,” was the message that stuck with the audience after Stuart Milk’s presentation at Rollins College. This motto was first promoted by his uncle, Harvey Milk, and now continues to be applied to present-day issues.

The Harvey Milk Foundation is well known both in the U.S. and internationally. Harvey Milk is a legacy and an example for us all, especially for the minorities that still suffer from severe forms of oppression. He was the first openly homosexual individual to be elected to a public office. He was not afraid of his identity, and he fought for his goals until his life tragically ended.

It was evident from the start of the lecture that Stuart and Harvey Milk had a strong connection. He talked about his uncle’s ability to dream – something that may seem frivolous to many, but that can actually be counted as a great quality. Even though the deceased activist is not here to see many of his goals achieved, he dreamed about them being reached. For that reason, according to Milk, his uncle was able to take the loathing bullets that lead to his death.

Milk presented himself humbly, as someone who is simply inheriting an astonishing work already initiated. Nevertheless, for the public, it was clear that his triumphs are more than a simple mirrored image from the past.

Milk took us on a journey through a myriad of countries and places within the restricted space of the Winter Park Plaza. From Tijuana to Praga, we traveled around the world to discover which advances have been made in the LGBT field and which obstacles are still present. Stuart talked about his organization’s work, and how their emphasis is not limited to big events and pride parades. The activist talked about his work in rural communities, where acceptance is still rare, and in places where he is only able to meet people behind closed doors because of the risks of exposure.
Living in a country like the U.S., where LGBT rights are stronger and the population is more tolerant of differences, people may have difficulties visualizing the greater picture. For that reason, Milk expressed his concern about the current situation in distant places on Earth. The spotlight of the night were his depictions of his time in Hungary, where violence against protesters is especially ruthless.

During a particular LGBT movement, no Hungarian was willing to talk to the press. It seemed like a lost cause, until one man agreed to speak up and advocate for his rights. When that same citizen returned home that evening, he found his father had hung himself because of the “shame” he felt for his son’s exposure. The interesting and gloomy fact about this story is that the father and son actually had a good relationship; the father knew about his son’s preferences, but wanted them to be kept private. A public display of the younger man’s “dirty” secret ended up being too much for the father. One day after burying his father, the proud young activist was on an 8-hour bus ride to another pride march.

Milk also spoke about other hindrances that are keeping the world from reaching equality. Many minorities have conflicts among themselves and cannot work together to find a space for their causes. Milk greatly emphasized our need to work together. He also commented on the arguments against homosexuality derived from nationalism and patriotism that depict the LGBT community (as well as other minorities) as a threat to the “family” and the nation. He urged us to be wary of these anti-equality voices, as many of them do not come from irrational people, but from intellectuals and even Nobel Prize winners.

He finalized his passionate speech by emphasizing that “It is not enough for us to tolerate differences – we need to celebrate them daily.”