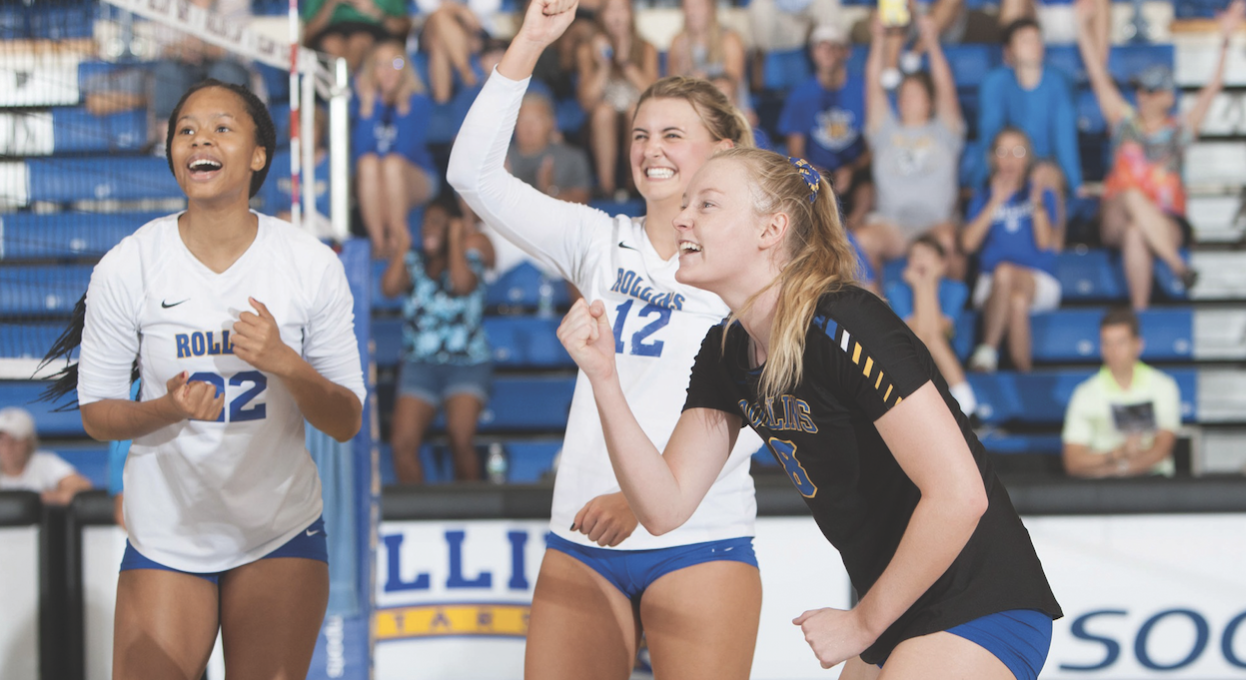 Due to their distinguished performance, members of the Rollins volleyball team will be heading to Brazil this summer. Cassidy Cason ’20 and Rachel Fletcher ’19, along with assistant coach Lisa Bushman, will join the USA Division II (D-2) volleyball team in May to tour South America.

Team USA is comprised of 20 players selected from 15 D-2 schools. It will be split into two separate teams, one of which will be coached by Bushman. The teams will compete in a tournament against the elite of Brazilian volleyball.

Despite having a tough season, the Tars have gained national recognition with these selections. Cason and Fletcher were selected due to their outstanding performances last season.

Cason, the main setter for the Tars, was a consistent force in this position all season, playing in all 27 games. She averaged 10 assists per set, good enough for fourth in the Sunshine State Conference. Cason also recorded a team high 19 service aces, as well as 1,020 assists, 218 digs, and 42 blocks.

Fletcher, in her third season for the Tars, also recorded some solid statistics. She, too, played in all 27 of this season’s matches, contributing 42 assists and 74 kills, and she led the team with 312 digs. She also achieved 13 service aces and 8 blocks.

Bushman, who has been on the coaching staff for three years, expressed her excitement for the upcoming trip.

“I know other players and coaches who have participated with… USA Sports Tours & Events before and they have had amazing experiences, so I said yes without hesitation.”

Bushman, who will coach Cason and Fletcher’s team in Brazil, mentioned the impact that the tour will have on them.

She said, “Cassidy and Rachel both work so hard day in and day out to better themselves and the program, and I am so glad they are being recognized for their work. It will be an amazing experience this summer and will prepare the both of them to play against high-level competition next fall.”

Bushman also pointed out that taking part in such a prestigious event says a lot about the culture of Rollins’ volleyball program.

“Rollins Volleyball focuses on pursuing excellence every day in everything we do, and that kind of drive is what allows us to be prepared for opportunities like this. Being surrounded by driven, like-minded women is an uplifting environment where we can grow, take risks, and prepare for life outside of sport.”

The Tars hoped that they can continue to foster this culture and use opportunities like this Brazilian tour to find success both on and off the court.

By having leaders like Cason, Fletcher, and Bushman participate in this prestigious tournament, the Tars are building for the future and setting the foundation for upcoming success.

Cason, Fletcher, and Bushman will head to Rio de Janeiro with the USA D-2 team on May 14. Their first matches against professional and club teams begin on May 16.