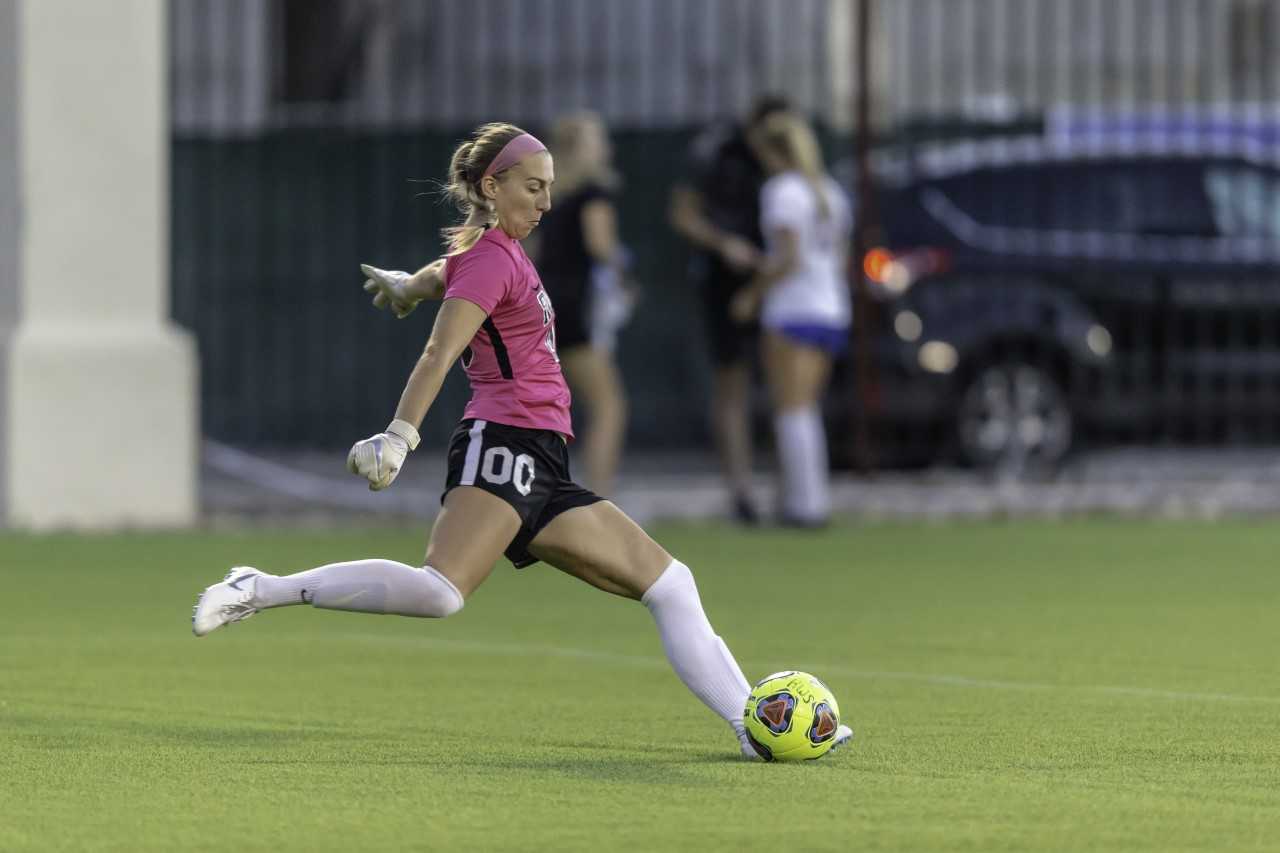 Although the team’s only goal was scored in the first half, the Tars’s defense was strong enough to deny all of the opponent’s attempts up until the final whistle blew.

Kathryn O’Brien (‘20) made the game-winning goal with what looked like an effortless placement of the ball into the net. She was assisted by Katie Evans (‘22), who executed a powerful throw-in into the box before O’Brien took over.

“I knew that they [the defenders] were tight on me, so I was turning her [the marker] a few times in the game,” O’Brien said. “[This time] she was blocking the ball to let her keeper get it and I just stuck my foot in there and tapped it in.” It looked like a goal out of thin air, but it was more than enough to give Rollins the win.

The narrow scoreline might give the wrong impression about the Tars’ attacking performance. With 19 shots, which forced nine saves in the process, Coach Alicia Schuck was very satisfied.

“I thought our forwards looked amazing tonight. They were combining, they were working hard, they were creating some really dangerous chances to score and I love that,” said Schuck.

The game’s second half was a Conference-worthy one, as the Tars managed to maintain the score with a whole-team effort. Wingback Gianna Merigliano (‘21) explained, “Really, the main thing we want to do, is not let them turn on the ball. Just high-pressure and win every 50-50 ball, if possible. We did a good job at that, I thought.”

It helps when the backline gets a hand from the frontline. “When I get the ball, I have to keep it and not lose it. We have to give [the defenders] a break,” said O’Brien, adding that goals are usually conceded when attackers are not fulfilling their defensive responsibilities.

“When we do our job and we hold the ball, make [the opposition] turn, go to the corners, and manage the game, then we can help the defense, take the load off of them,” O’Brien said.

Schuck agreed, saying, “It just adds so much to our attack when our forwards are really stretching backline. That was something to be very proud of. Teams are good enough in this conference to break you apart. When we do get broken apart, we still create a wall of defense and it’s hard to get through us. For the chances that we gave them, we were exceptional all over the field, defensively.”

The Tars are in the midst of a high-intensity stage of their season, as they face some of their toughest opponents. Yesterday, they traveled to Eckerd College. For Schuck, it is all about timing and management. “Our team is a little bit tired right now, so we really have to spend some time on the recovery process to get ready. I’ve said this earlier, the girls are on a mission. They are just so focused on trying to end at the top of the conference, in those top positions in the conference, even if not first right now,” said Schuck.

According to O’Brien, the atmosphere among the players is optimal. “Winning obviously helps a lot. Winning forms a habit. Once you’re winning, you’re used to winning. You know the feeling and you don’t want to not feel that. Losing sucks!” said O’Brien. The mentality becomes particularly important in such a physically-demanding phase, with the Tars having played on average every three days for the past three weeks.

Merigliano is on the same page, attributing the progress to the work ethics. “Honestly, I think we’re in a really good place right now. We really worked hard from spring season, to pre-season, to now,” she said, emphasizing the intensity of the workload. “It’s been paying off. Towards the end of the season, I think we’re going to go far this year. I really believe that we will. As long as we keep working how we’re working, then we’re going to get to what our goals are.”

But can the Tars end up in a high seat in the conference? Schuck said, “Whether Eckerd, Saint Leo, Embry-Riddle or [Florida] Tech, no matter our last four games, they’re just names to us. We just have to go out there and make sure we’re performing and executing the game plan.”