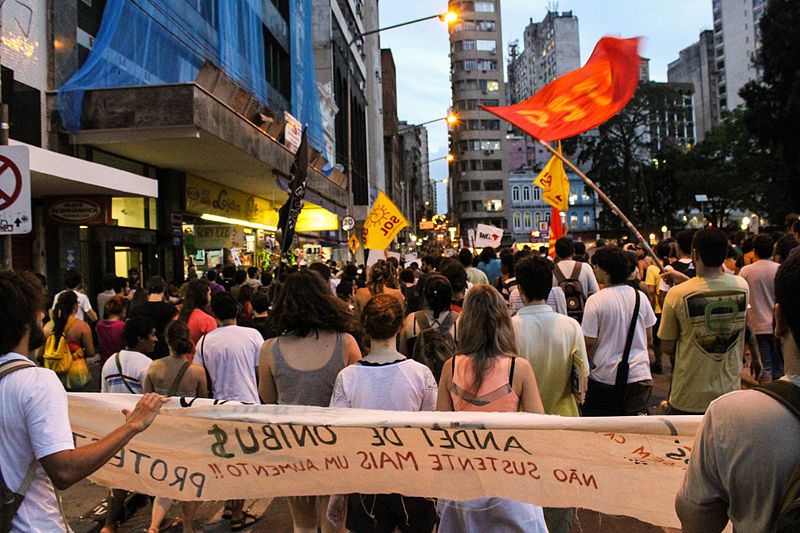 As the World Cup approaches and excites the world, Brazilians are protesting against the soccer event, demonstrating that there’s bigger issues that plague the country.

Tropical beaches, beautiful women, and lots of partying are the first pictures in people’s mind when they think about Brazil. The last images I have of my country, however, are of tear gas, rubber bullets, and countless bruises.

These past few years have been important to many developing countries in the world. From the Arab Spring to the recent unrests in Venezuela, our global atmosphere seems to be shifting and an anxious agitation is in the air. The reasons behind such great events is up for debate, but one thing is for certain: Brazil has joined this new revolution club.

Throughout 2013, I attended diverse protests in my hometown, Porto Alegre. What started as a simple bus fare riot evolved into a massive wave of demonstrations throughout the country. Brazil is known for being a quiet, tropical paradise, where people are way too happy sipping their capirinhas and chilling at Copacabana. Indeed, what happened last June was surprising even for me. What has led such a complacent population into a fierce state of protesting?

Probably the World Cup. Wait. What? Brazilians love soccer, do they not?  Well, as fascinated as we are by soccer, I believe we have a higher esteem for a functioning educational and health system. I am pretty certain most Brazilians would also choose a less corrupt government or more equality within our society over soccer any day. The problem is that we did not get to choose between these options, so the World Cup it is.

It does seem funny that, for a country lacking in virtually all aspects of living conditions, we found the funds to build stadiums.

Do not get me wrong, I did not protest against the World Cup, even though I am “against” it. The overwhelming and unforeseen movement that occurred last year turned into a mess faster than it made any substantial demands. Honestly, I just wanted to be able to take a nice bus ride home, without having to be cramped and gasping for breath, to have a true public transportation system where no corporate profit is not involved (after all, I am pretty sure it was supposed to be public?), and to give the overall population a change to reach their destinations peacefully (in Brazil, public transportation is more common since the great majority of people cannot afford private cars). I thought my demands were not that complicated, but apparently they were; the transportation scenario continues the same.

What is sad, however, is not that our people’s lives are becoming more complicated each day. What happened in Brazil, and what is still happening, is a generalized discontent towards not only one aspect of our country, but, apparently, all of them. Especially the World Cup. It does seem funny that, for a country lacking in virtually all basic aspects of living conditions, we found the funds to build stadiums, reform the ones we had, restructure our airports, improve myriad roads, etc. Did we have all of this money in the first place? And, if we did, why did we not spend it on health or education (two things our nation desperately needs)?

I am not asking Americans to not come to Brazil; I am actually asking quite the contrary. Now that the disaster has been made, please come! At least we can get some money back from all of the (pointless and ridiculous) investments the country made. I can guarantee that those coming are going to have a good time—Brazil’s stereotype is to have fun, after all. Drink some exotic cocktails, enjoy the nice weather, and talk to some outgoing and happy people. But keep in mind that the ones who will profit from this marvelous adventure are those who already have all the money in the country. That guy in the favela struggling to catch a bus in the middle of traffic will not see his live improved; however, the hotel owners and the airline CEOs will earn some fat checks during the World Cup. Come and enjoy, but keep a critical eye!

Photo by Circuito Fora do Eixo