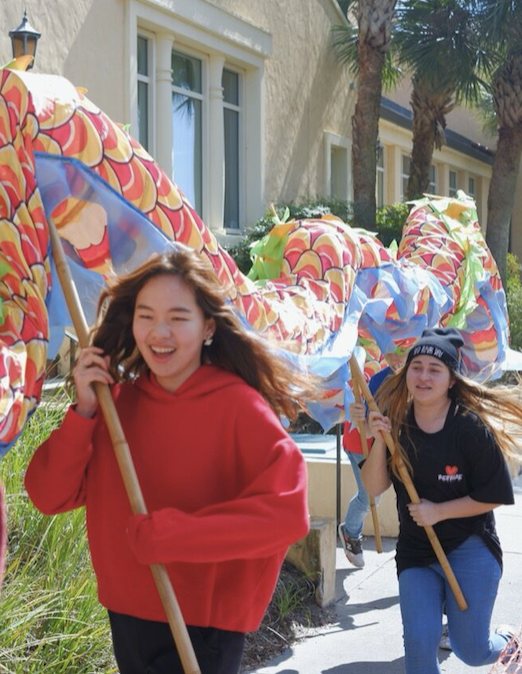 Ten students from the China Club and German Club carried the long, winding dragon through various buildings on campus in celebration of Chinese Lunar New Year.

Its lanky red-and-green body flowed in the wind while its fire-breathing mouth and glistening eyes looked deep into the souls of the students it passed.

This dragon, an iconic symbol of Chinese Lunar New Year, was toted around campus last week by 10 students, a partnership between the China Club and the German Club.

“It was heavy and the coordination with other members was hard to pick up on,” said Joy Ding (‘21), the vice president of public relations for the China Club. Between the up and down motions, moving right and left, and staying on beat with the music, it is more difficult than one would think.

“It was meaningful being Chinese, to learn about my own culture more [and] at the same time spread it to Rollins campus and students,” Ding said. Despite it being physically demanding, she said that this connection to culture was the most rewarding part. Growing up in Shanghai, she had always seen the dragon dance performed, but she never took part in it herself.

Chu Chu ‘20, president of the China Club, said that traditionally, Chinese music is played and the beans on the dragon move, making noise that matches the beat of the music.

The group went through the Bush Science Center, Olin Library, and the Campus Center.

“I saw a lot of people I knew and they were all cheering and laughing at me… they were showing their amazement, but there were not many questions regarding [what it was]” or the tradition behind it, said Ding.

The dragon dance is traditionally performed to bring luck in the new year. The history of the dragon is extensive in China. “The dragon is deemed as the emperor,” said Ding. It symbolizes “imperial power, good luck, and strength,” said Nicole Li ‘20, vice president of the China Club.

Dragon dances may also be performed at traditional Chinese weddings, said Ding. Traditionally, there is a dancer ahead of the group who holds up a ball on a stick to lead the dragon.

Rollins acquired the dragon four years ago, when the Greater Orlando Chinese Professionals Association (OCPA) sold it to them. It was originally purchased in China, so the OCPA was hesitant to sell the valuable item to Rollins. Yet, Wenxian Zhang, professor of Asian Studies and head of archives and special collections, negotiated the deal.

Rollins has continued its relationship with the OCPA. Students in classes with Professor Li Wei, Chinese lecturer, perform at the annual Central Florida Lunar New Year festival, which is run by the OCPA.

However, students are more familiar with the dragon that appears on campus during the annual Lunar New Year Festival. This dragon is stored in the archives for most of the year, according to Wei, until it is taken out to make an appearance at the annual festival on campus.

It is also used by Full Sail and University of Central Florida students.