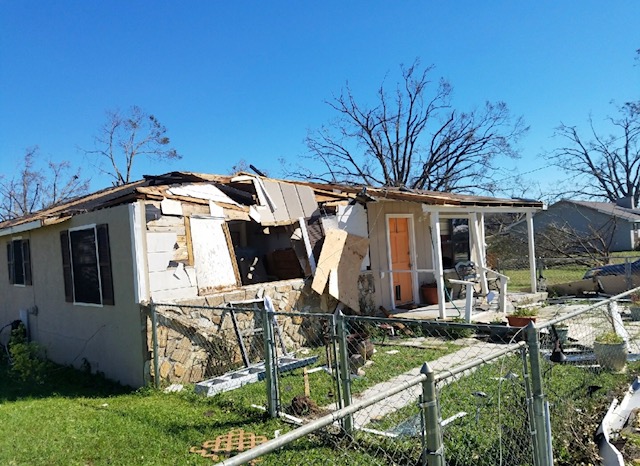 The roof of the one-story house in Panama City is caving in and splinters of wood poke out. The planks of wood the homeowners used to board up the windows in preparation for the hurricane hang helplessly like loose shutters. Damp pink insulation covers all of the furniture inside. This is what the Panama City home of Raiven Bryant’s (‘22) grandparents looked like after Hurricane Michael.

The physical structure of the home was completely destroyed, stealing away many childhood memories Bryant made there, she said. The house had been in their family for more than 40 years. “[I] learned how to shuffle cards in the living room of that house. After that I always wanted to play cards when we would visit my grandparents,” Bryant said. She also remembered fighting with her siblings over playing on the computer in the backroom. It is hard for her other family members, too. “My uncle, he called me… crying. And I don’t ever, like, hear or see my uncle crying, but… that’s the house he grew up in, so he was really upset,” said Bryant.

Bryant’s parents live in Niceville, approximately 50 miles west of Panama City, and their home fared well in the storm.

While her parents were safe, her grandparents did not have time to evacuate before Hurricane Michael hit the panhandle on Oct. 13. Overnight, the storm changed from a Category 2 hurricane to a Category 4. It was only two miles per hour shy of a Category 5 and was the largest hurricane to ever hit Florida’s panhandle, according to an online Time article.

“By the time that… they realized how bad it was going to be…it was too late for them to go anywhere,” said Bryant. Her grandparents were in the back room of their house when the hurricane hit and their roof caved in.

“If you look at the pictures of the front of the house you can see which room they were in and [the section where the roof came off is] right next to them, just a wall separating them. It’s an old house too… so thin walls,” said Bryant. The shed in their backyard was also completely blown onto its side.

“There’s definitely no way for them to live there again,” said Bryant. “They’ll apply for [Federal Emergency Management Agency (FEMA) aid, and] see what they can do.” As they wait to hear back from FEMA, they are staying with Bryant’s parents in Niceville.

Fortunately, her grandparents are alright, but others were not as fortunate. There were 15 deaths alone in Bay County, which includes Panama City.

Fellow first year Reagan Raley (’22) of Gulfbreeze, west of Niceville, was also fairly lucky. Both girls stayed at Rollins as the storm approached, and they comforted each other as the storm passed through their hometowns.

Raley’s family evacuated in the middle of the night, but their home survived. “My house was… not really affected. There was just a lot of rain and some trees fell, but… my house is perfect,” Raley said.

Bryant and Raley said that the Rollins’ Dean of Students office sent them personalized emails of support. “We got emails… directed to us individually,” said Bryant.

Those emails directed them toward faculty members they could talk to if they wanted to. The emails also included an offer of any further assistance from the college. “It was nice to see,” said Bryant.

Bryant said that the hardest part about being away from home during the storm was that she could not contact her grandparents and cousins, because allthe power lines were down. “I could talk to my mom, but all she could tell me was like ‘we haven’t talked to them yet, we still can’t get in touch.’ So, I’m just 6 hours away like, ‘Oh my god what’s going on?’” she said.

Panama City is receiving support from neighboring cities, as well as several aid organizations like the Salvation Army. In a National Public Radio “Morning Edition,” a representative from the organization said that they have been serving meals in “various locations around the Panama City area.”

At first, “they had everything blocked off, only first responders were going in for like the first two days after,” said Raley. But now, she said that a lot of neighboring towns are helping out. Raley lives 45 minutes away, “but my town is making so many trips [up to Panama with supplies.] They’re getting a lot of support from local places,” she said.

For students who were not impacted by the hurricane but want to help in the recovery process, the Rollins Center for Leadership and Community Engagement (CLCE) sent out a campus-wide email with ways to do so.

CLCE encouraged students to support hurricane relief efforts by providing cash donations, which they said are “the most effective way to support survivors.”

The most direct option is to text DISASTER to 20222 to “provide a one-time $10 donation or Disaster25 for a $25 donation” via The Florida Disaster Fund. Other hands-on service opportunities shared by the CLCE have already passed.

Students or faculty and staff can also extend their support by donating blood. The easiest way to find a donation center is to go to oneblood.org.

Further information sent out via the CLCE email revealed that Airbnb is “looking for hosts with housing available in the Florida Panhandle.” If students know of available housing in the Bay Country area, this may be one way they can help.

Bryant added that besides active support, the only thing left to do is pray.