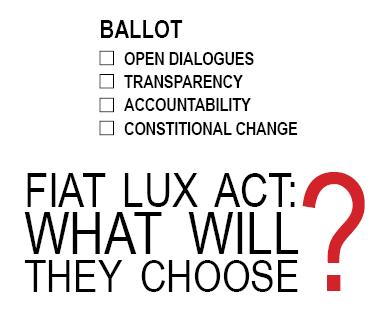 On Wednesday, April 18, the Student Government Association (SGA) met for its penultimate meeting of the semester. After going through reports on the executive board, Senate member Ed Leffler ’14 took the floor to discuss his proposed Fiax Lux Act.

One of the more controversial proposals in the bill is for publishing roll-call votes in the minutes and then forwarding that information to the Rollins community, including on the SGA website and/or The Sandspur’s. “The minutes need to be more detailed and made widely available in more than one platform,” Leffler stressed.

This would allow non-SGA members to see exactly who voted for and against certain legislation. Leffler claimed that this will create more “accountability and democracy” in SGA, and went as far as to say that SGA is “hiding their votes” without this policy.

“SGA is comprised of officials elected by our constituencies, and is an organization funded directly by student tuition. We need more transparency in our affairs,” he said.

The bill spurred mixed reviews from the other SGA members. “All students are welcome to our open meetings; Why do we need to take further measures?” asked Senate member and President-elect Ben Varnum ’13. “Will this policy be relevant five to 10 years from now?” he continued.

Leffler replied that these are “great and appropriate changes.” Office of Student Involvement and Leadership representative Brent Turner called SGA’s current constitution out of date and “dysfunctional,” suggesting that the constitution be revised before making changes to the current one.

Billy Kennedy ’12 recommended a “friendly amendment” that would make names to roll-call votes available upon direct request. This proposal was favorable with most of SGA.

Leffler hopes that his bill will influence the future of SGA. “What I see for the future of SGA is a body that places heavy power in the Legislative Senate and places limits on the powers of the Executive,” he said. “SGA should encourage people to get involved by creating dialogue and even sometimes controversy. SGA this year has been set on maintaining a rosy picture of itself and not letting students know that debate is going on within the Senate.

Getting the word out that these sort of debates are happening would allow students to become more invested in SGA,” he said.

When asked about his opinion on the future of SGA, Varnum declined to comment but said that he hopes to talk “in the near future,” once the election period has ended.