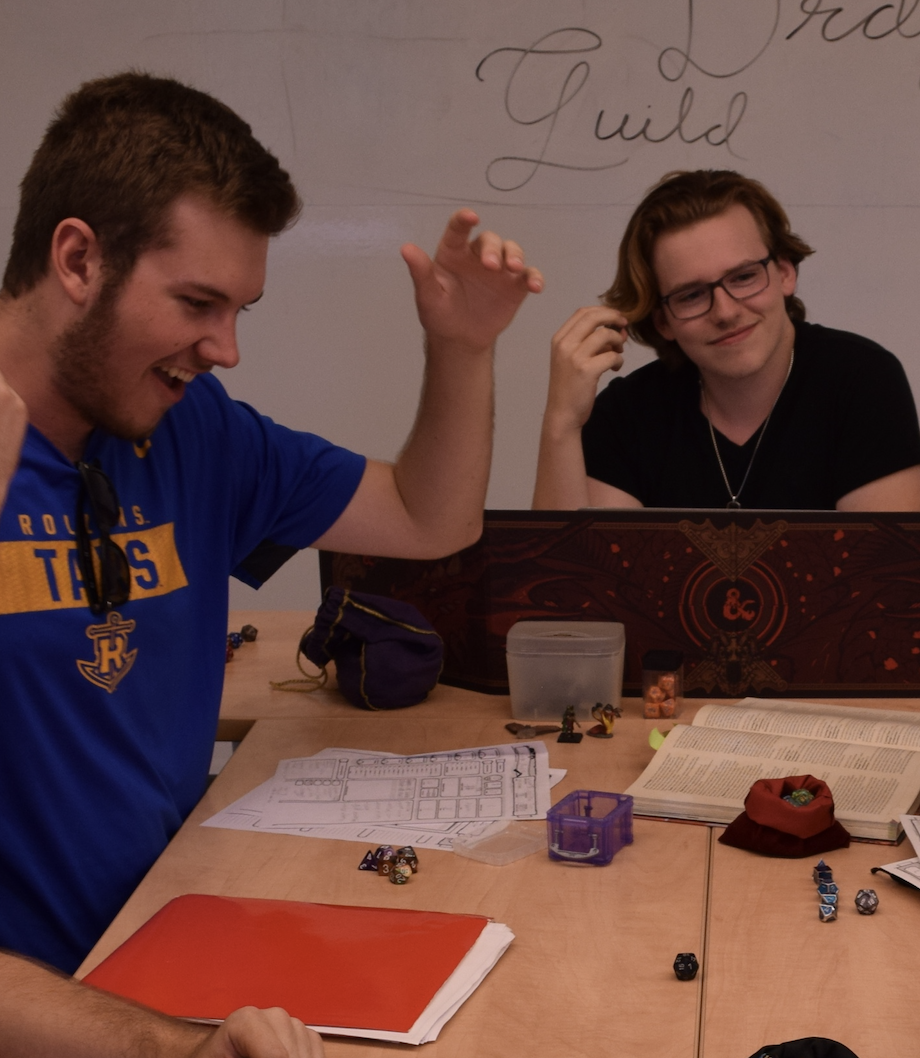 Over forty students have signed up to participate in the new Dungeons and Dragons club before its first meeting, blowing away the expectations of the new club’s president.

After Board Game Club’s members grew interested in playing Dungeons and Dragons,  a role-playing game, the idea for the club was born.

“We had originally estimated less than 20 people, and we have more than doubled our estimation, which is amazing to see,” said Weston Ludlow (‘22), president of the new club.

Evan Munger (‘22), the club’s treasurer, was not as surprised: “I did expect this going in. I’m honestly more pleased with the variety of people we have. Just the different perspectives and minds coming to the table in addition to the quantity,” Munger said.

While the group is not yet an official Rollins club, all requirements have been met to become one at the end of this month.

“From what I’ve been told, it will be official as soon as the period for club registration is over,” said Ludlow.

The game will not be played during club meetings; rather, the club is a place for students to discuss the roleplaying game.

“We’ve decided to just have this as a place for people to make the groups in their own time since it is such a lengthy bit of time it takes to play,” said Ludlow.

Games in Dungeons and Dragons are called campaigns, which take place over long periods of time. Sessions can be as frequent or infrequent as a group would like.

“The longest [session] I’ve had was about seven hours,” said Sabrina Bergen (‘22), a member of the club, “but it’s usually like, instead of going out, you stay in on a Saturday night and just play for hours.”

Dungeons and Dragons was originally released in 1974, slowly becoming a cult classic. In the past, the board game received heavy backlash and stigmatism ranging from the game being satanic to being nerdy. The latter continues to be a stigma today.

“I don’t think it will ever be cleared up,” said Bergen. “I think it will always be seen as a dorky, nerdy thing, but that’s because it is and it’s fun, so who cares?”

Ludlow added, “You hear about how it was in the 80’s where it was stigmatized as a sort of devil worship, and then nowadays it is becoming a very popular thing.”

Recent pop culture has helped shed a new light on the game, which fans greatly appreciate. Shows such as “The Big Bang Theory” and “Stranger Things” have included the roleplaying game in a positive light.

“D&D’s popularity is going up a lot, especially thanks to ‘Stranger Things,’” said Bergen. “It’s become a more well-known game to play.”

While the game demands time commitment, it allows for an escape from everyday life, whether the player chooses to act in the story or be the Dungeon Master, who is the game organizer.

“It’s such a creative and fun way to use your imagination as an adult,” said Bergen. “When you’re a little kid, you play make-believe and then you get older and you come up with more complex ways to make-believe and imagine things.”

The club will meet Wednesday nights once it is officially sanctioned by Rollins.