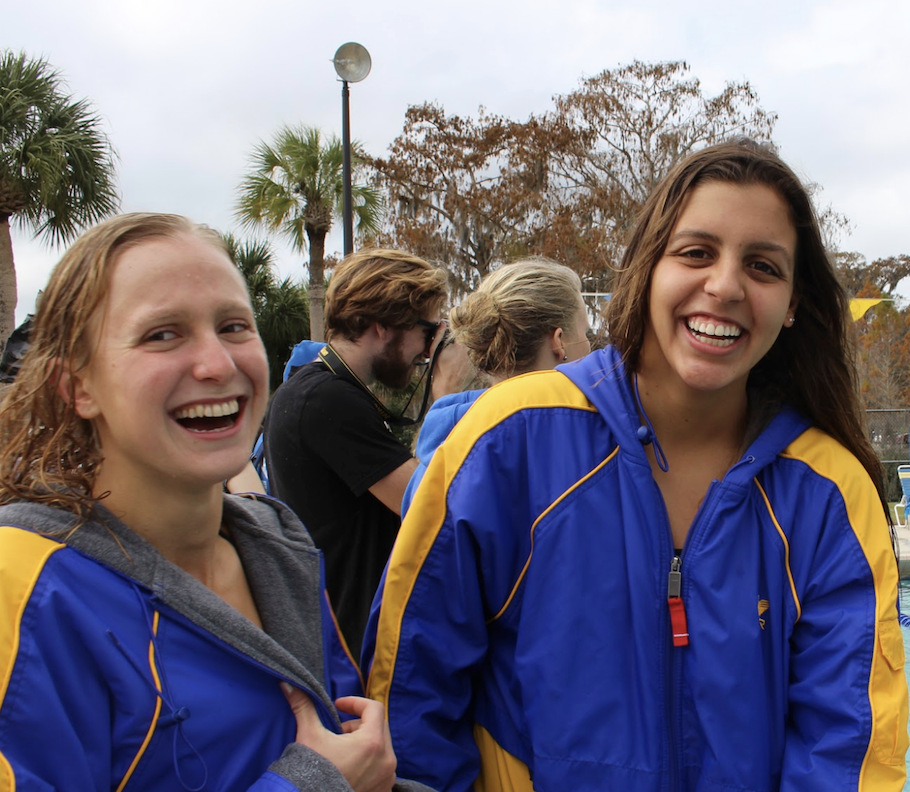 As the Rollins swim team celebrated its departing seniors during last weekend’s meet against Lynn University, the swimming Tars’ new generation rises to the top. One of the distinguished members of the up-and-coming cohort is Beatriz Olivieri (‘22) from Rio de Janeiro, Brazil.

Olivieri made herself at home in the Alfond Swimming Pool by winning the 200-yard Individual Medley on her debut. She continued with a streak of wins and convincing performances, culminating in the Panther Invitational at Florida Tech.

Olivieri emphasized the importance of staying positive: “Swimming is not supposed to be a burden, but something you have fun with,” she said. “Of course it’s tiring and no one likes to wake up early every day or stay in on a Friday night when your friends are going out, but there’s a lot of positivity in it.”

As a child, Olivieri was recommended swimming to help her deal with asthma and bronchitis.

“Back then, it was much more about being with my friends. The team vibe was what kept me going, because I wasn’t really good initially,” she recounted.

Olivieri revealed that she started competitive swimming in 2009: “In my family, everyone had to do some kind of sport, particularly when we were younger. I liked it a lot, but the training schedule was always rough.” In a similar fashion, her older brothers had taken up soccer and martial arts.

Eventually, with all its advantages and scholarships, swimming for the Tars provided a path to the future for Olivieri. Even though it sometimes felt beyond reach, Olivieri trusted herself.

“Coming to Rollins is the fulfillment of a dream, something which I worked very hard for. Sometimes in class I have these moments when I’m just like, ‘Wow, I’m really here. It actually worked,’” she said.

As a tournament that boasts the highest GPA in the country, the Sunshine State Conference considers academic success a prerequisite for triumph in the pool.

The coaching staff was certainly appreciative of Olivieri’s academic excellence, but Olivieri’s enthusiasm and selflessness are the qualities that particularly stood out to Assistant Coach Julianne Kurke.

“She’s always open to swim whatever event we need her in. That’s a big part of college swimming,” Kurke said. “Not necessarily swimming what you’ve been trained to swim, but to be a flexible athlete, to be willing to step up in a couple of different areas and fill up some gaps we have.”

“Here we have dual meets, and our main focus is the result as a team,” she explained. “Of course, personal improvement is important, but I feel like each of us wants to do well so that the team does well. Especially in dual meets against other schools, it’s not really about your time, but how well you can push through and bring the results home.”

Team chemistry was an important criterion for Olivieri when she was deciding between her college offers. She admitted that she thrives in the presence of others.

With two weeks left until the Sunshine State Conference Tournament, the team enters taper, which means the intensity of training drops so the swimmers are fully rested for competitions. However, coaches have their eyes set on the next stage already.

“We’re pretty optimistic she will be invited to the NCAA championships, so with that information, we want her to taper and peak specifically in mid-March,” Kurke explained.

This means Olivieri will be training more than everyone else ahead of conference. However, just the idea of competing at a national level provides her with all the motivation she needs.

When asked about her long-term objectives, her answer was reflective. “I want to leave feeling like I did a good thing for the team. I feel like we, the current swimmers, are responsible for putting the swimming team in a better place,” she said.