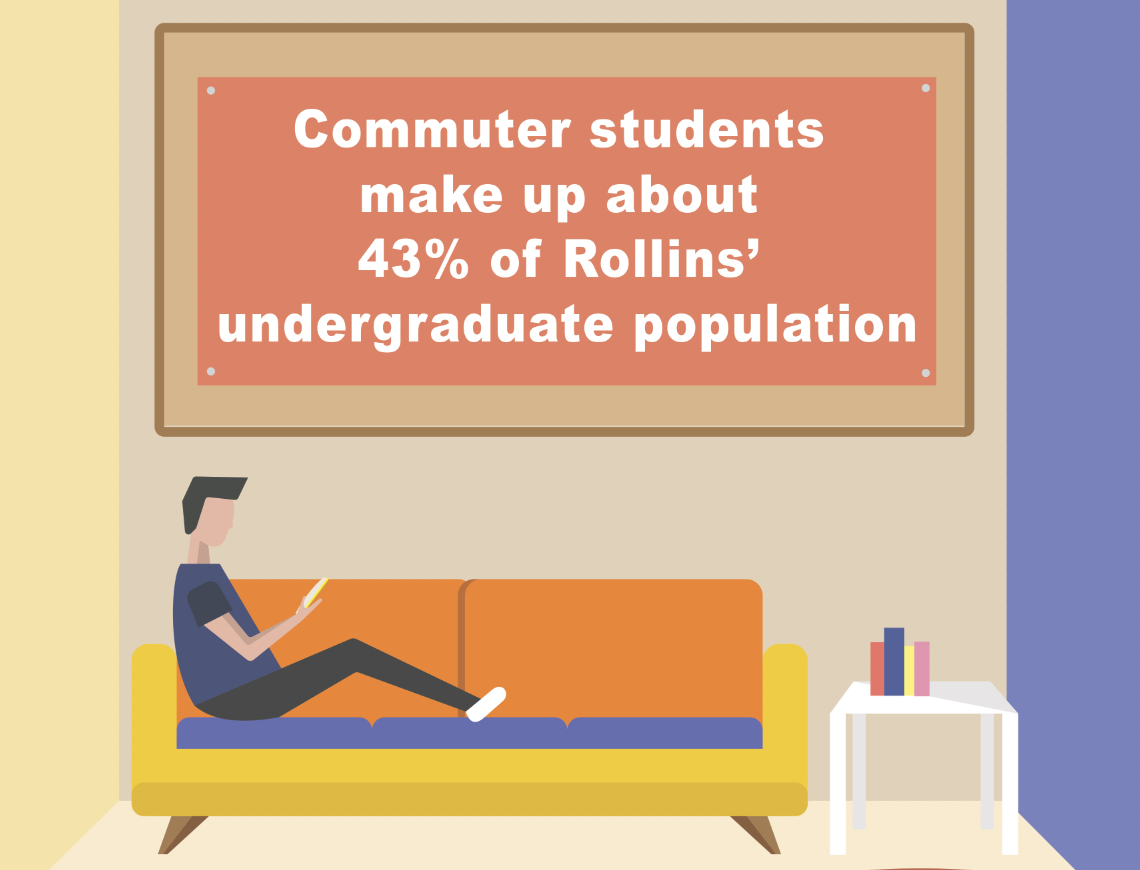 Off-campus students will have a new space

As campus undergoes massive construction, the leadership of the Off-Campus Student Association is working with Rollins’ administration to find a permanent lounge space in the heart of campus for commuter students.

Off-campus students make up about 43 percent of Rollins’ undergraduate population, according to the most recent edition of the college’s Common Data Set. Historically, off-campus students have had a dedicated space that acts as their home-base, allowing them to integrate into on-campus life and culture.

Due to construction, the lounge was temporarily moved to Woolson House, a space allocated to the English department, thanks to the efforts of Marcelandone Dormeus (HH ‘21), co-president of the Off-Campus Student Association, and Hannah Munford (HH ‘21).

The two were determined to find a temporary space for off-campus students until the building’s renovation was complete.

Woolson House had the features necessary to accommodate off-campus students. The central location, lounge area, and kitchenette made it easy for students to relax with other students or eat meals between classes.

The lounge was also only open to off-campus students with R-Card access and therefore provided a sense of security, especially as many students used the lounge to store belongings.

In addition, during shelter-in-place emergencies, when community members are required to remain sheltered until given an “all clear,” the lounge was used as a safe haven.

Students were originally told that the Fox Den, a community space in Kathleen W. Rollins Hall, would be designated as the permanent off-campus student lounge space.

However, as the design and development of the building progressed, it became clear to organization leaders that the Fox Den would not accommodate commuter students as appropriately as previous off-campus student lounges, like Woolson House.

A petition for Rollins administration to provide a designated, secure space for off-campus students was started by Niko Ellison (‘21), the co-president of the Off-Campus Student Association.

The petition garnered over 400 signatures during winter break due to an outpouring of support from other Rollins clubs and community members.

When the spring semester began, the student association’s leadership and college administrators arranged meetings to discuss the off-campus lounge issue.

On Jan. 27, leaders of the organization held a meeting with key administrators to discuss the future of the lounge space for off-campus students.

The meeting resulted in a plan to include an off-campus student retreat space on the first floor of the Lakeside Residential Complex.

Meghan Harte Weyant, dean of students, was present at the meeting.

“We can give them a retreat lounge space that is within feet of the rest of the community,” said Weyant. She believes this kind of space will provide off-campus students the full benefits of a community-focused liberal-arts education.

This new proposal is a triumph for the organization, following years of uncertainty to the location of the off-campus student lounge.

“I am so excited for our new home and want to thank the admin team for truly listening to us,” said Ellison.