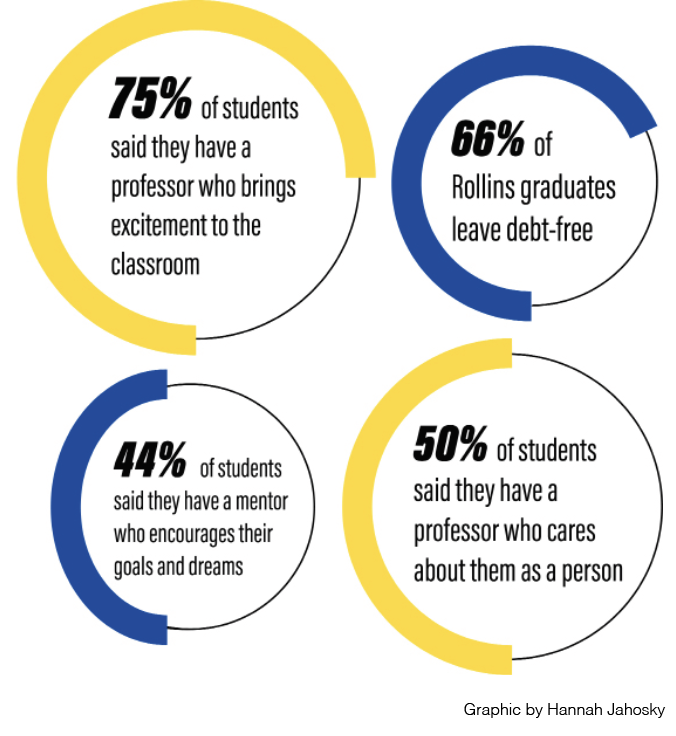 The statistics for the study were taken from 2,000 undergraduates and graduates through a voluntary response email survey in the fall of 2018.

Rollins’ results are closest to other small national liberal arts colleges, such as Eckerd University. These schools are known as peer institutions due to their similarities in size and identities as private liberal arts schools.

In the survey, Rollins alumni and current students were asked about academic and student-faculty engagement, campus climate (diversity, inclusion, and response to critical interest), and career development and support.

Helen Stubbs, senior consultant at Gallup, presented the survey data to the Rollins Board of Trustees.

“It’s rare that we see an institution take this in hand as much as you [the Board of Trustees] have,” she said.

Rollins exceeds in purpose, financial, and community engagement areas while ranking marginally higher than its peer colleges in social and physical wellbeing.

Responses reveal that more Rollins students than average are confident that they will have a good job after graduating. They also find that they have a purpose on campus with close friends, which improves their social well-being.

Stubbs said it is “really phenomenal” that those that do graduate with debt at Rollins tend to have low amounts of it, helping financial well-being during and after college life.

Rollins also ranks highest in academic engagement among students at 48 percent. The national average is at 32 percent, and peer institutions place closer at 45 percent.

Students were asked if they had a professor who made them feel passionate about their class and if they did schoolwork that was relevant to the workplace.

Students exceeded all comparisons on four of six of Gallup’s “big experiences” at college; 75 percent of students said they have a professor who brings excitement to the classroom, 50 percent said they have a professor who cares about them as a person, 44 percent have a mentor who encourages their goals and dreams, and 29 percent are “extremely active” in extracurricular activities.

While poll numbers for current students exceed other colleges in nearly all investigated categories, graduates were found lacking in perceived academic rigor and the worth of their education compared to the price tag. Graduate analysis will be covered in a future issue of The Sandspur.