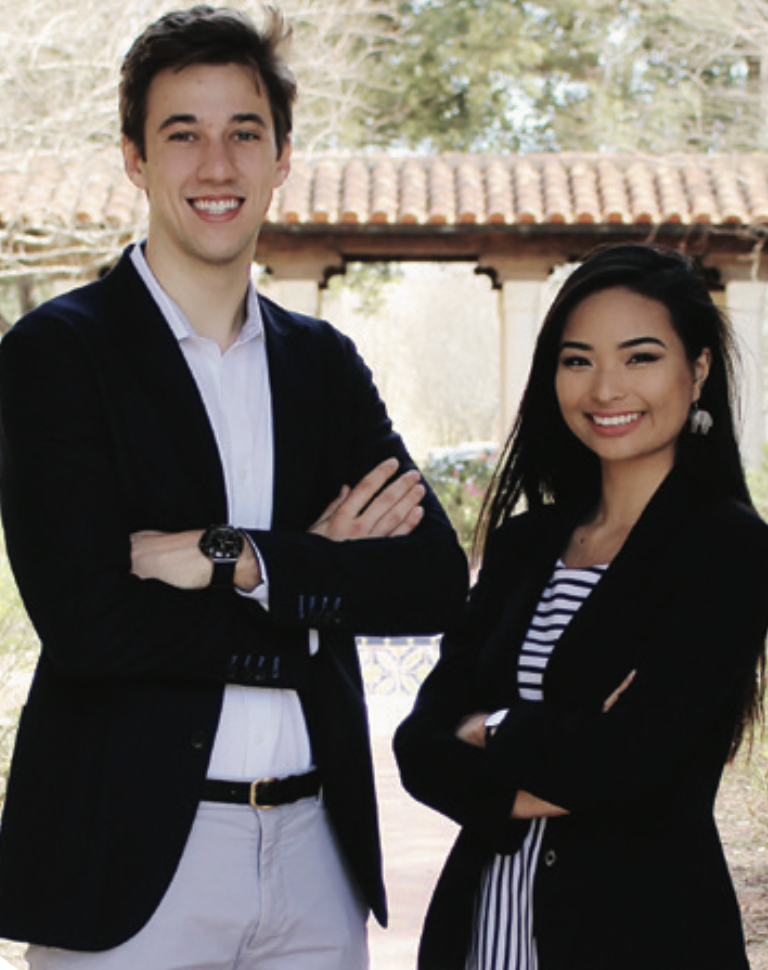 Nam Nguyen is running as president of the Student Government Association (SGA) alongside Harrison Loew as her vice president. Nguyen, a junior, and Loew, a sophomore, said that their strong friendship, strong-minded personalities, and self-accountability are what would make them the best pair for the job. Here’s what you need to know about their initiatives and qualifications for the positions:

Nguyen believes there should be better dining options for students with diet limitations, including students with Celiac’s disease, as well as vegan and vegetarian diets. “It’s not sustainable to eat rice and beans all day every day. So, we want to talk to [Dining Services] about incorporating some meat substitutes and vegan cheese options.”

While the pair did not have

specific solutions to solve the campus parking crunch, they

said they would work to make sure the on-going construction projects limiting spaces are completed on time to bring spaces back as soon as possible. “Accommodating this transition will be difficult,” said Nguyen. “We are going to work our best to really pressure Rollins to get the parking garage done as quickly as possible.”

Nguyen said that SGA does a lot on campus, but students do not understand exactly what it does. “We haven’t been the best at sharing that,” she said. She said that relying on others in the communication process has “watered down” SGA’s ability to reach the students, but added that she and Loew would work directly with students to keep them updated with campus projects and initiatives.

A second shot at the presidency

Nguyen ran for president last year but was not elected into office. She said that this time “everything is different” because now she is honing in on specific issues related to student life. “Last year, my campaign focused on a little bit of everything. This year, we are really narrowing it down to what we think students want,” said Nguyen.

A future in politics

Nguyen said that she envisions herself as a politician in the future. She was the treasurer for the Rollins Democrats and said that she thought about running in 2020 for a seat in the Florida House of Representatives. “I think I will end up in politics no matter how hard I fight it,” she said.

Loew said he is not going to cancel out politics, but is more interested in investment banking. He admitted that he did not vote in the recent election: “I feel like it’s better to keep my hands out of something that I am really not focusing on in my future,” he said.

Loew is currently in his second semester as part of SGA, but he said that this should not limit students’ expectations of his expertise and effectiveness. “I haven’t been involved in SGA as long as Nam has, but I’ve been involved in a lot of other ventures—building my own business, building my own charity, becoming vice president of my fraternity and being vice president of [men’s fraternity] recruitment,” Loew said.

“In a professional sense, it brings a very practical and real-world application of certain ways to lead, be more efficient, and get things done.”

Nguyen, on the other hand, has been involved with SGA for three years, acting as class senator and PR chair in her first two years. Now, she serves as the academic affairs chair.