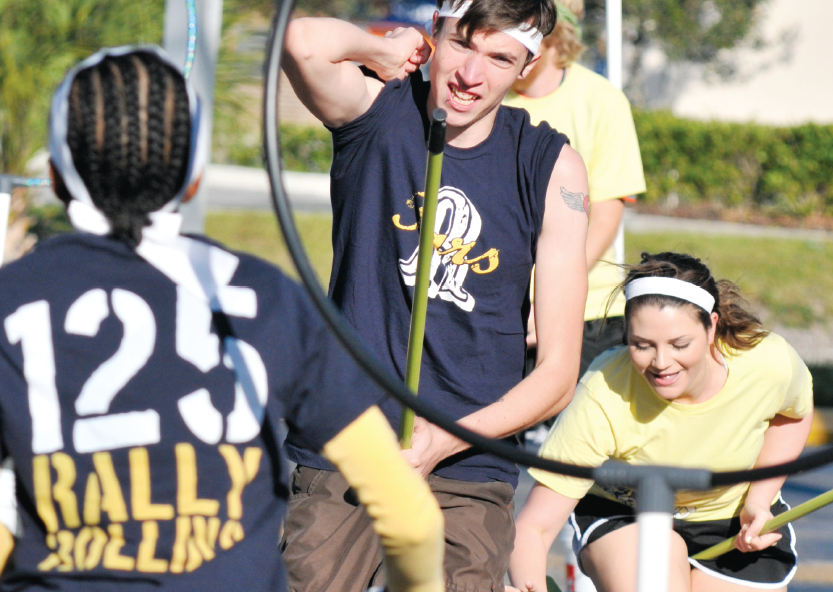 Who says that magic doesn’t exist? This weekend, the Rollins Quidditch team, also known as the CenTars, got to experience magic firsthand at a local soundstage and later in New York City for the 2011 Quidditch World Cup. Friday, Nov. 11, was a great day for Rollins Quidditch, marking the day that the CenTars left for the World Cup, but also the day that Rollins got to playQuidditch with cast members from the Harry Potter movies.

Early Friday morning, members of the Quidditch team drove out to Full Sail to visit the local news show, The Daily Buzz, which was hosting a DVD release party for Harry Potter and the Deathly Hallows: Part Two. Rollins was set to play a scrimmage match for the show, which added a fun quality to it. Shortly after warming up, the team was joined by George Harris (who portrayed Kingsley Shacklebolt in the films), Domhnall Gleeson (Bill Weasley), Devon Murray (Seamus Finnigan), Jessie Cave (Lavender Brown), Alfie Enoch (Dean Thomas), David Bradely (Argus Filch), Stanislav Ianevski (Viktor Krum) and Katie Leung (Cho Chang).

Immediately, Gleeson approached a small cluster of players, including captain Christian Kebbel ‘12, and asked what the rules were. Kebbel immediately began explaining the rules so that the cast members would be able to cheer for the teams properly. Soon after, the scrimmage began between those Rollins players headed to the World Cup and other members of the Quidditch club.

Half the cast cheered for the World Cup team and half the cast cheered for the opposing side, and all seemed to have thoroughly enjoyed it. The cast cheered when someone was about to score and groaned when a shot was blocked. But they seemed to truly love the battle between Seeker Charlie Jicha ‘12 and the Golden Snitch, played in the scrimmage by Mitch Verboncoeur ‘13, laughing when Verboncoeur jumped over a car. The morning ended with the cast being interviewed on The Daily Buzz and then quickly leaving for The Wizarding World of Harry Potter at Universal Studios, but not before stopping for pictures and to joke around with the Quidditch team. The best part was how easygoing the cast members all were, joking around with people that they had just met, becoming people to us again, not just the actors from the iconic movies. That afternoon, it was off to New York for the eight players headed to the Quidditch World Cup. The CenTars joined 94 other teams from four different countries at Randall’s Island in Manhattan for a massive showdown to determine who the best Quidditch team is.

For those of you asking how we Muggles, non-magical folk, are able to play Quidditch, a sport typically played on flying brooms, I will explain the rules. While in the Harry Potter books the brooms fly, in our sport you simply run with a broomstick between your legs (and trust me, that’s harder than it sounds). There are three Chasers who run the Quaffle (a partially deflated volleyball) across the field, similar to those who play attack positions in soccer. Their goal is to get the Quaffle through three tiny hoops at the end of the field, earning their team10 points.

Guarding those hoops is a Keeper, similar to a goalie, who has to guard all three hoops at once. Helping the Keeper guard the hoops are two Beaters, players who hold a dodgeball and throw them at the opponents. Once a player is hit by the Bludger (dodgeball) they must return to their goal before they can rejoin the game.

The final player, and the most prestigious, is the Seeker, whose job it is to find and catch the Golden Snitch to end the game. In the book, the Snitch catch is worth 150 points, but in the shorter Muggle game, the catch is only worth 30 points, still more than enough to sway a game.

And with these simple rules, thousands of Harry Potter fans collected on Randall’s Island in New York to play, watch and discuss Quidditch. Nine pitches (fields) were constructed and stands erected, allowing the teams to play with an audience cheering them on. The CentTars joined these teams as opponents and as friends having never won an International Quidditch Association game. But Rollins stood its ground in all
four games that the team played. The first team that Rollins faced was Miami University of Ohio. The two teams fought hard for possession of the Quaffle, but Miami took the initial rush to score.

The CenTars fought back when Keeper Billy Yates ’12, rushed the field and scored a quick goal, returning the score to a tie. After several more goals, Jicha pulled the Golden Snitch to bring Rollins out on top, 70-60.

“That moment when we knew we won our first game … when Charlie [Jicha] caught the Snitch, and we all just rushed in and picked him up … the whole team coming together. It was just an amazing feeling,” said Kebbel. After starting the team only two months ago, Kebbel was proud to see his team play hard, but also with great sportsmanship. “Every player contributed to our wins, and we just kept our spirits high. I think the other teams picked up on that, too, and the announcers as well, and it made them like us for it.”

And it was that great sportsmanship that made the weekend as amazing as it was. While not playing games, the CenTars made friends with other teams from all over the world. In fact, Rollins became such good friends with a few of the Canadian teams that when we played a huge Canada vs. USA Dodgeball game, Rollins was recruited to help the Canadian side.

But while teamwork lead to Rollins’ two wins at the World Cup, Jicha must be commended for his seeking abilities in every game played. He pulled the Golden Snitch, probably the single-hardest thing to do in Muggle Quidditch, in every game played, including a second Snitch in overtime during our last game against CAMPS of Massachusetts, leading us to a last minute victory, 70-50. The weekend, for Rollins’ two wins as well as the new friends made, was a complete success. The team represented Rollins, as well as the rest of Florida, with the utmost respect. Rollins Quidditch is already preparing for next year’s World Cup, and is looking for anyone who is interested to come out to practices on Fridays at 4:30 p.m. The team is built around the idea that anyone can join and play at any time, so the players on the field are constantly shifting to allow everyone game time. We hope to see you on Mills Lawn this Friday!