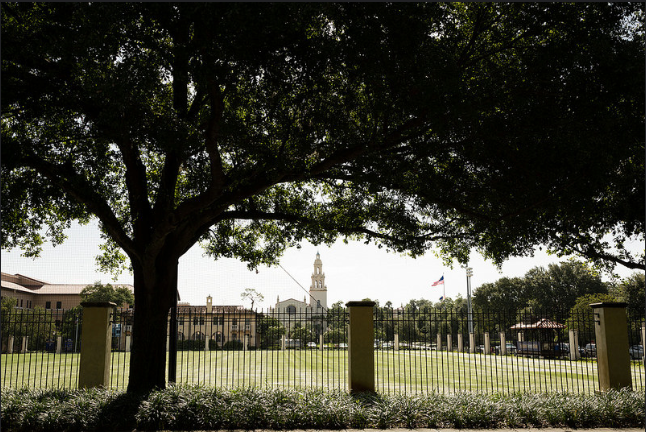 Sandspur stadium gets a makeover

Rollins spends 800K in expanding the Sandspur field to meet NCAA regulation, as well as to prevent injury and make the field more soccer and lacrosse friendly.

“15 feet.. What’s the difference?” has been a question echoing around campus since renovation of the Sandspur stadium began this summer.

Well to the NCAA it makes all the difference, and is a necessary change if Rollins plans to continue hosting post-season contests.

According to Assistant Director of Athletic Communications, Clay Starrett, “Rollins has been grandfathered in over the past few years and granted the ability to host NCAA Postseason events, but has known for a while a change had to be made”.

So over the summer, Sandspur stadium, home of the lacrosse and soccer programs, got a makeover. In order to make the surface area meet NCAA regulations, the field was expanded fifteen feet toward Holt Ave. The fence and pillars, light standards, and press box had to be relocated to accommodate this growth. Then a netting and new drain were installed underneath the field to improve the playing surface.

Athletic Director, Pennie Parker, explained that the official reason for the expansion was safety. The runoff area around the field was too tight and needed to be changed in order to prevent injury. Parker said that the current dimensions of the stadium were too narrow for soccer, and too short for lacrosse.

Rollins women’s lacrosse captain, senior Alley Rhinehart, said she’s “very excited about the expansion of Sandspur because the additional sideline room will provide more safety to athletes. ”Intramural softball player Clay Pepe said that “Sandspur stadium is not only important to Rollins’ varsity teams, but to intramural athletes, like myself, who want to showcase their athletic prowess”.

These changes will not only benefit the athletes but also the fans. “Freshman year I attended my first soccer game and was shocked to see the front row empty while the other rows were packed”, remarked sophomore Andrew Matthews. For years the front row has been left abandoned due to the railing that blocked the whole left side of the field. Fortunately, this will no longer be a problem, with future plans to shift the field lines toward Holt Avenue. Next summer, the field will also be expanded on the west end toward Warren Building to center the playing field within the stadium.

So what did all this cost? VP for Finance at Rollins, Jeff Eisenbarth reported that the project came in at about 800k which put the program under budget. This number included all of the work done on Holt Avenue, parking, as well as landscaping outside of the field area expansion. The good news? None of this will come out of our pockets or even impact the athletic budget.

VP for Finance at Rollins, Jeff Eisenbarth reported that the project came in at about 800k

Eisenbarth stated that “to date we have received $300K in gift funding with more anticipated, and the remaining cost not covered by gifts will come from the annual allocation of capital renewal budget.”

According to Eisenbarth, the expansion to Sandspur was an important step in the athletic program’s ultimate goal to “provide full access to our playing fields for student recreation, intramurals and club sports, as well as our athletic programs.”